This November, hundreds of media industry professionals from around the world flocked to Las Vegas, Nevada to network along the ‘FIPP Strip’ and take part in this year’s three-day symposium. The Congress program featured more than 50 speakers (including top executives from U.S.-based companies like Hearst, Condé Nast, Meredith, and National Geographic Partners) across three stages reporting on the state of the industry and various panels. The discussions, which attracted a standing-room-only crowd at times, ranged from incentivizing paywall usage to international expansion and revenue diversification strategies. 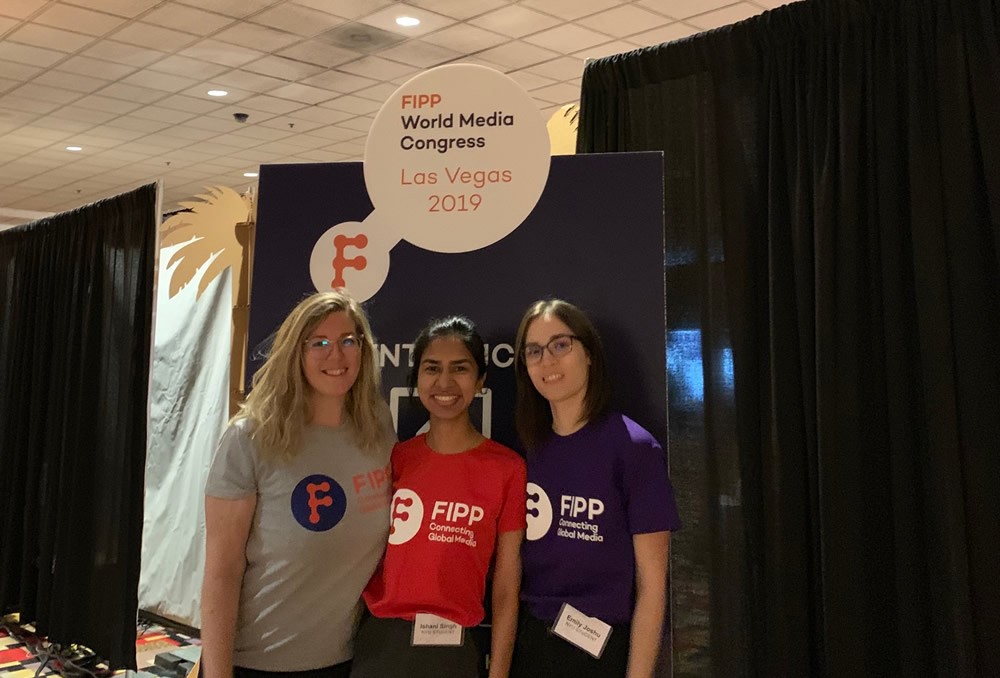 This year, FIPP invited the NYU MS in Publishing: Digital and Print Media program to participate in the Congress, and three students were selected: Emily Joshu, Ishani Singh, and Emily Smibert served as conference volunteers. They were asked to takeover the FIPP Twitter and Instagram accounts, reporting live (and fast!) on all programming. Emily Joshu was also tasked with managing the Slido app, deftly handling the Q&A portion of the presentations.

The students also attended the organization’s award ceremony honoring rising industry stars and champion campaigns, sat in on all of the speaker sessions, and engaged with industry professionals one-on-one. They headed home from the Congress with new insights into their personal media interests inside and outside of the classroom. 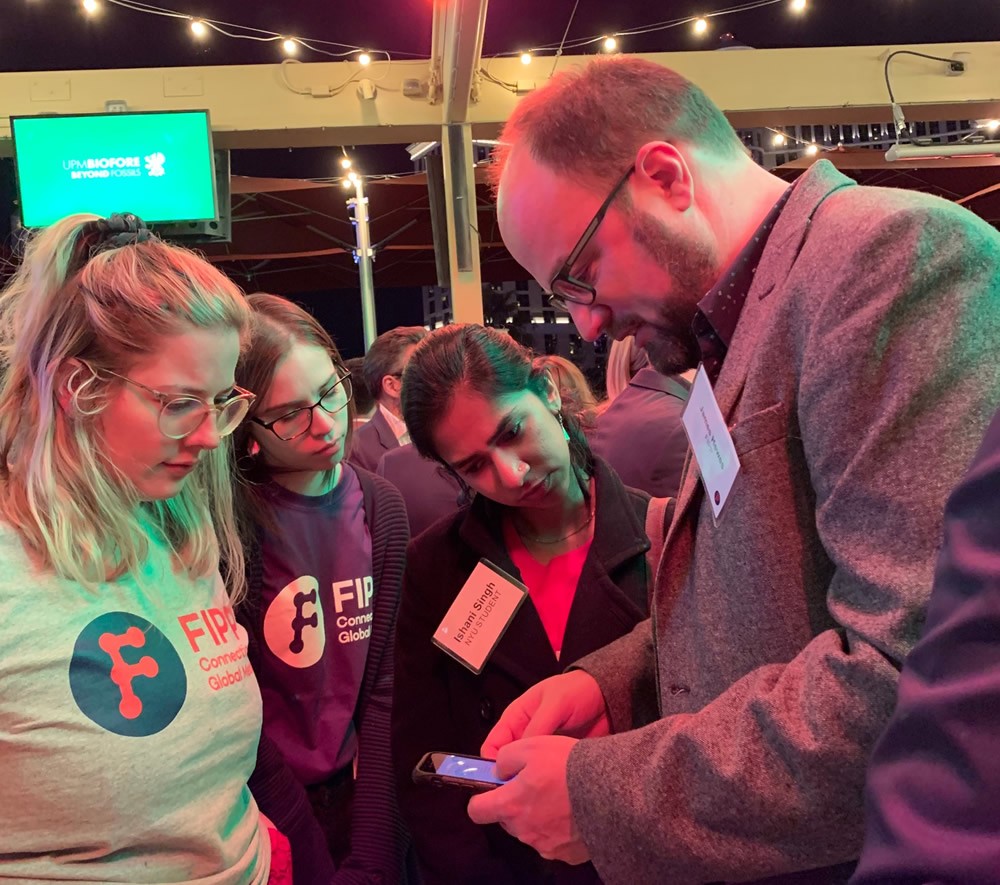 "As someone who works in print magazine media, it was refreshing to hear the positive outlook from industry experts on the future of formats such as bookazines and monthly print editions," said Joshu, "The networking opportunities were hugely beneficial, and speakers were accessible and willing to answer questions we had following their talks."

As international students, Singh and Smibert also enjoyed the conference’s global aspects. "It was great to see international representation from companies outside the U.S., which gave us a glimpse into the changing media and publishing trends emerging from Europe and the U.K.," said Singh.

As a Canadian student, it was also fascinating to see what is going on and who I should be paying attention to in my home country; during the awards ceremony, I even reconnected with a small publisher for whom I had briefly interned.

Notable sessions included sit-downs with U.K.-based illustrator Christopher Spencer, a.k.a. Cold War Steve, on his ascent from political Twitter artist to TIME’s iconic Brexit cover artist, and POLITICO Editor-in-Chief Matthew Kaminski on the upcoming 2020 election. Kaminski was particularly eloquent on his brand’s approach to political journalism in an era of social media and fake news. 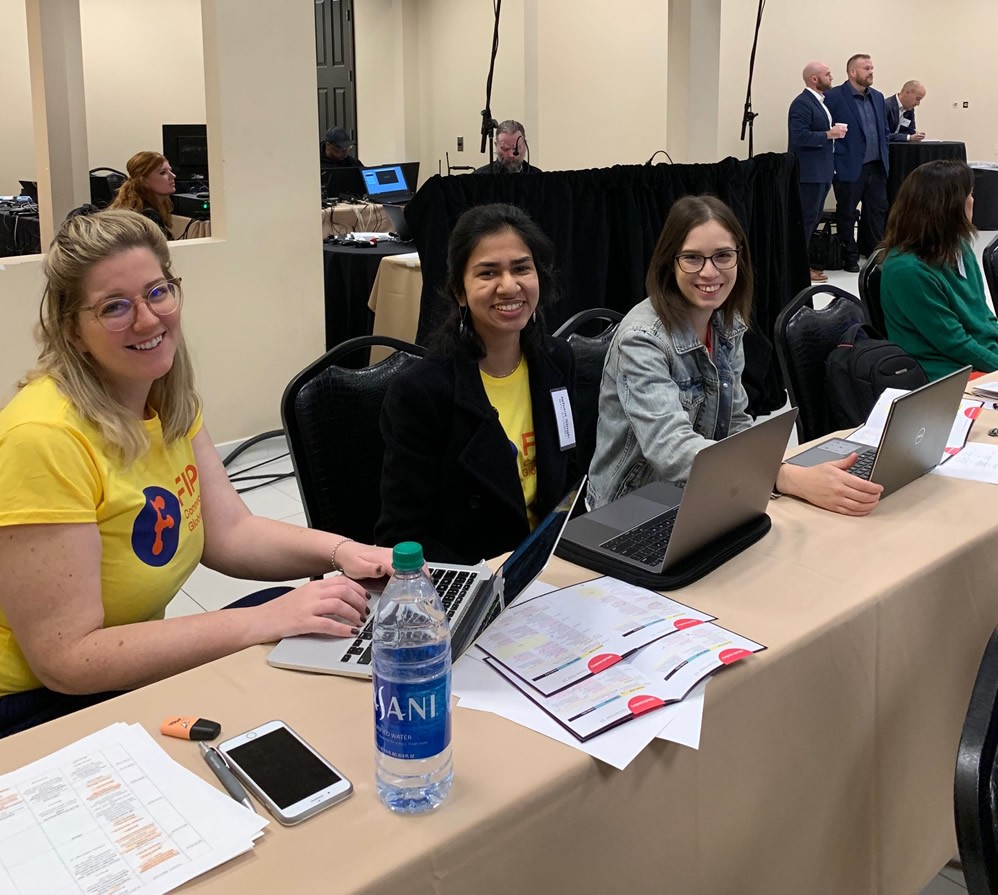 The three students really liked hearing Angela Henshall, Senior Producer of the 50:50 Project at the BBC, report on the British network’s efforts to reduce gender inequality within media with its 50:50 Project. The BBC’s sole mission with this initiative is to "increase the number of fantastic women in journalism to reflect our society, and effectively shift from a state of 'trying' to state of 'achieving'," said Henshall. “At BBC, there’s no compromise on quality of content; it’s about getting brilliant women into content.” How have they done it? By regularly sharing production data, keeping an eye on monthly totals and goals, using data to identify barriers, and reviewing regular contributors. To date, more than 500 other media outlets have adopted their practices and followed suit.

Despite the vast sectors of the media industry represented at the Congress, what became quite evident as the sessions progressed was the importance of branding and consumer-first driven approaches to content. "Brands solve problems," according to Eric Gillin, Condé Nast’s Chief Business Officer, Culture Division. "Magazines are about platform, and brand is what those magazines are doing; it becomes about the users you’re attracting."

Another important piece of advice came from Forbes Media CEO Mike Federle. It’s important, he reminded us, that as we continue to move forward and transition into new distribution models, "Innovate on HOW you approach your business, not WHY." 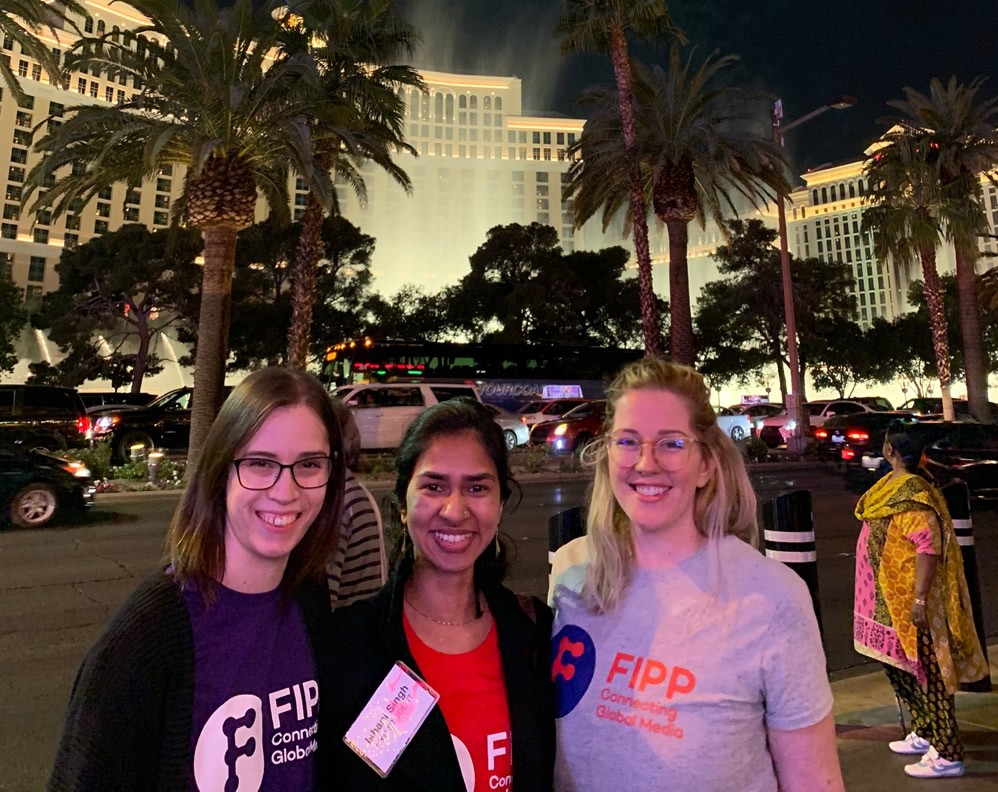 "This Congress brought new thinking and understanding to concepts in content creation, marketing, and branding; these are takeaways I can implement in my assignments in class, my Capstone project next year, and beyond, as I pursue a career in media," said Singh.

From my point of view, while our industry is experiencing rapid rates of change greater than ever before, four pillars are key to finding success today: the call to listen to your consumers; the need for diverse revenue streams (including paywall strategies); the ability to lean into your brand identity and brand communities; and a dedication to deliver a unique quality content experience.

Alfred Heintze, COO of Burda International, summed it up well: "As a global media community, we have the ability to connect people, interact, and learn what [our consumers] strive for, and by doing so, hopefully create moments of joy and happiness. There’s no better place or time to make people happy and fulfilled than by leaning into their passions."

As we look ahead to 2020, the future remains hopeful. Said Trusted Media Brands’ President and CEO Bonnie Kintzer, "If you have the right content, it doesn’t matter what platform it’s on, it can reach an audience."