NEW YORK, October 20, 2020 - - New York University’s Center on International Cooperation and the Center for Global Affairs, part of NYU’s School of Professional Studies, are launching an online dashboard aimed at tracking diversity at the leadership level for the United Nations: the UN Senior Leadership Appointments Dashboard.

This original, online dashboard collates information issued as press releases by the UN about appointments of its most senior leaders since 1996, tracking various measures of diversity including gender, national origin, age, and educational background.

“We used a machine learning-based web scraper to collect information from press releases in a fraction of the time it would have taken a human to do it,” explains Paige Arthur, deputy director of the Center on International Cooperation (CIC). “For the first time, we have rich information on more than 1,300 appointments at the UN’s most senior level—the Under-Secretaries-General and the Assistant Secretaries-General rank.”

A virtual launch event for the dashboard will be held from 1:15 to 2:45 p.m. EDT on Thurs., October 22, featuring Jean-Pierre Lacroix, Under-Secretary-General for the Department of Peace Operations, along with former heads of UN peace operation missions: Karin Landgren, Ameerah Haq, and Nicholas Haysom. The link to the dashboard will be made available during the launch.

The dashboard has a wide range of uses.

For example, an analysis using the dashboard has shown that for the most senior leaders in UN peace operations field missions, appointments of women have surged since 2017 under current UN Secretary-General, António Guterres. However, the research, conducted by Foteini Papagioti, a graduate of the Center for Global Affairs (CGA), and Paul von Chamier, a research officer at CIC, shows that overall since 1996, 78 percent of appointments in these roles have gone to men. 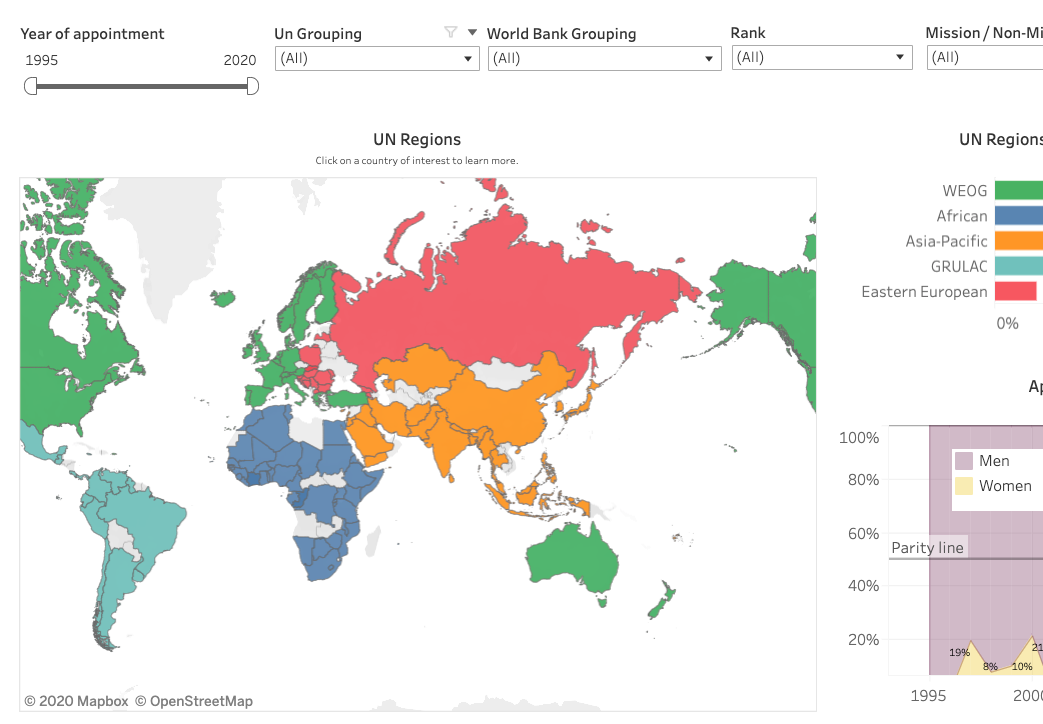 A commitment to appointing increasing numbers of women has been a core part of the current Secretary-General’s Gender Parity Strategy, with a view to achieving gender balance, particularly in the UN’s most male-dominated institutions such as UN peacekeeping missions.

Haq, former special representative of the Secretary-General (SRSG) for Timor-Leste, observes, “I recall when I was on my way to Timor-Leste in 2010 to take up my post and was asked to attend a meeting of SRSGs in Montreux. As always, a group picture was taken, and I was the only woman in that group. And I recall thinking, ‘This is 2010—it's not 1950 or 1960. Can we not do better than this? What is it going to take to flip this picture to have one man among women SRSGs?’ ”

The dashboard also broadens the discussion on diversity at the UN to other areas. In terms of national origin, appointments are skewed, with approximately 50 percent of all senior appointments going to countries from the Western Europe and Others Group (WEOG), which includes North America and Europe. The rest of the world—representing more than 80 percent of the planet’s population—accounted for the remaining 50 percent of appointments.

The Center on International Cooperation and the Center for Global Affairs see the UN Senior Appointments Dashboard as a resource for scholars and decision makers alike to understand, in a quantitative context, diversity at the United Nations.

“No part of the UN has yet assembled this specific data in one accessible place,” says Anne Marie Goetz, clinical professor at CGA. “Without this information, it is hard to verify claims of progress in meeting diversity goals.”

By quantifying the progress made over the past two decades, existing gaps can be clearly identified and closed in the future.