As a book lover, it’s always a conflicting time when I find out a book I’ve read is being turned into a movie. On the one hand, it’s exciting knowing beloved characters will be brought to life and gripping moments played out on the big screen. On the other hand, I worry that the wrong actor might be cast for a role or a critical plot point might be written out in the screenplay. With Hollywood and streaming services like Netflix rapidly adapting popular books and series into blockbuster movies and binge-worthy TV shows, it’s always interesting to find out what the experience is like for the authors and if they share the same worries and excitement as readers. At the recent NYU Media Talk "From Book to Screen and Stage: New Audiences for Bestselling Fiction" co-hosted by the NYUSPS Center for Publishing and the NYUSPS Office of Alumni Affairs, the audience received a behind-the-scenes look at the process of transforming a novel to a screenplay and a script to a novel. Bestselling authors Harlan Coben, Val Emmich, and Adriana Trigiani all had plenty of intriguing viewpoints and stories to share on the topic. 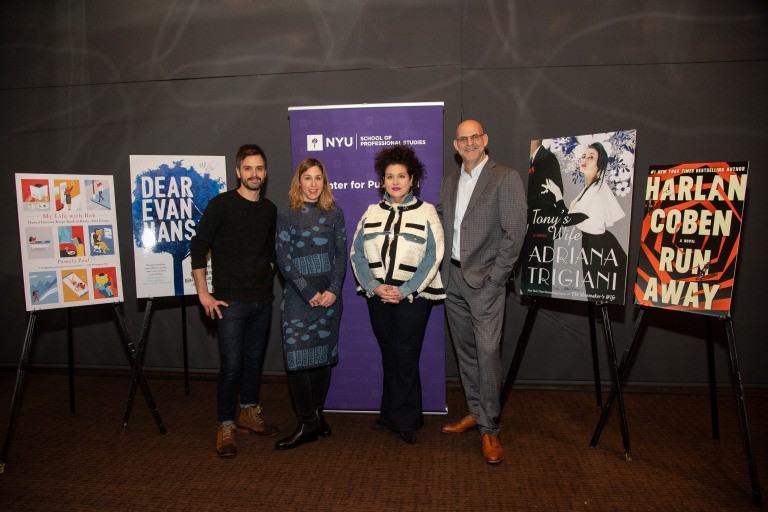 "Did you always want to be a writer?" asked the moderator, Pamela Paul, Editor of The New York Times Book Review and all book coverage at the newspaper. It’s hard to imagine that these talented authors would have wanted to be anything else other than a writer, but the responses were varied and fascinating.

As for Emmich, he started out with very different aspirations: "I didn’t want to be a writer. I wanted to be a rock star. My dad was always reading and I wanted to write a novel to connect with him. I don’t know what started it, but I kept trying and failing and the failing kept driving me to do it."

The authors went on to reveal their paths to being published. Although their experiences differed, the authors shared a core commonality: "It’s always about the audience," Trigiani explained.

The panelists each spoke to this throughout the night, always placing their audiences first when it came to writing their stories and seeing them transformed into different media.

Coben’s bestselling novel Tell No One was successfully adapted into a French film, but he revealed that the first script he read brought him to tears. "It was the worst," Coben said, shaking his head. There was a disconnect between the book and the screenplay and too many elements were changed that would have made his readers upset. Following his gut feeling, Coben decided to wait and go with another screenplay he felt was right for his audience. It wasn’t until he read French director Guillaume Canet’s screenplay that Coben believed his book had found its movie match. "I didn’t work on the screenplay, but I was on call all the time. They changed the ending and I loved it."

Emmich’s debut YA novel, Dear Evan Hansen: The Novel, based on the hit Broadway show, also came about with the audience in mind. "I chose Evan’s [viewpoint] as the main point of view, but I wanted to know who Connor [a student who takes his own life in the play] really was. The big challenge was that [the musical] existed in a really exalted form. There was a lot to live up to. After seeing the show, I realized I had to write to create the same level of emotion for readers that the audience felt seeing the play." As Pamela Paul pointed out, it’s very uncommon for a play to become a book. Emmich agreed but noted that the creators had "really pure notions in mind. Broadway is expensive and located in New York. They wanted the story to be more accessible to a wider audience."

Trigiani offered a unique perspective, having written and directed the film adaptation of her widely loved novel Big Stone Gap. "I look at my books and think, 'How do I dramatize that?'" When asked if directing Big Stone Gap made her see the story in a different way, Trigiani shook her head. "They’re completely different things," she revealed. "You have to divorce yourself from one." 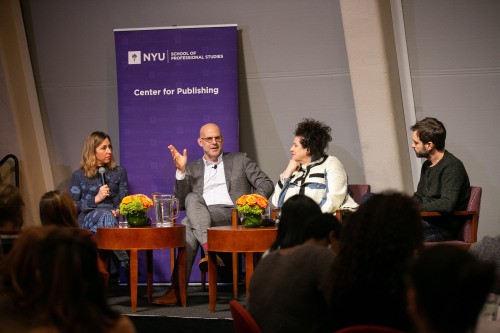 At the close of the talk, the authors provided some advice to those in the audience interested in writing. "Discipline," offered Emmich. "Sit in the [chair] and do it. It’s work."

"Inspiration. Discipline to write. Desperation." Coben counted off on his fingers. "You have to write with fear. The fear of having to have a real job," he joked. "When you stop writing with fear, you’re dead."

Trigiani agreed that discipline is an important quality, but disagreed with Coben on writing with fear. "It doesn’t help you to be scared. It makes you sick. What brings me joy is the work. I’m gonna be dead and I still haven’t done all the ideas I have."

It was a great and captivating evening, filled with laughter and engaging insights. I believe Trigiani’s closing words captured the spirit of the night, inspiring the gathered audience. "For you the storyteller, write a book, make a movie, make a show. This is the best time to get your stories out there. Ever."