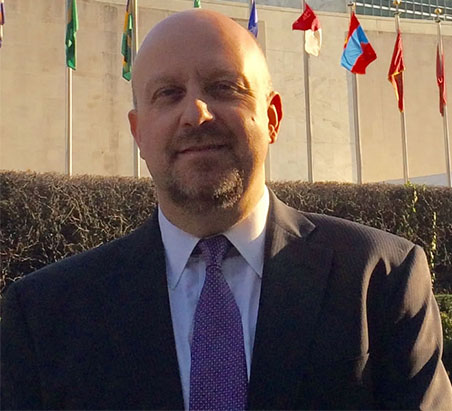 Raymond A. Smith, Ph.D., LL.M., is an Adjunct Associate Professor with the NYU School of Professional Studies and a member of the Executive Committee of the Program in Human Rights Practice at the University of Arizona. Over the past two decades, he has taught a wide range of courses in politics and human rights at NYU, Columbia, Columbia, and Arizona, and is the author of books including The American Anomaly: U.S. Politics and Government in Comparative Perspective (4th Ed., 2019) and Importing Democracy: Ideas from Around the World to Reform and Revitalize American Politics and Government (2010). His most recent book is Extending International Human Rights Protections to Vulnerable Populations (2019).  As a Senior Fellow with the Progressive Policy Institute, a think tank in Washington DC, Prof. Smith contributed political commentary for publications including Politico, The Daily Beast, The Washington Post, The Hill, and The New York Times. Prof. Smith holds an M.A. in international relations from Yale, a Ph.D. in political science from Columbia, and LL.M. in international human rights law from the University of Essex in the U.K.

America in the World: Dilemmas of Democracy at Home and Abroad

Explore how studying other democracies can shed light on the troubled present—and possible future—of American politics and government.

Gain a broad, multidisciplinary overview of gender in international affairs, drawing upon examples from international, national, and local contexts.