By Elizabeth Haas and Mathis Bitton

After talking with a broad swath of mayors last week as part of the Conference of Mayors in Washington, D.C., it became clear that the metaverse continues to be a central theme in their thinking and conversations. As expected, many mayors are interested in how the metaverse can be used to stretch their city budgets to address critical challenges they face today and in the near-term future. One city that stood out as being ready and able to address both close-in and future challenges and opportunities is Cincinnati, primarily due to the commitment of its communities and businesses and its creative use of public-private partnerships. 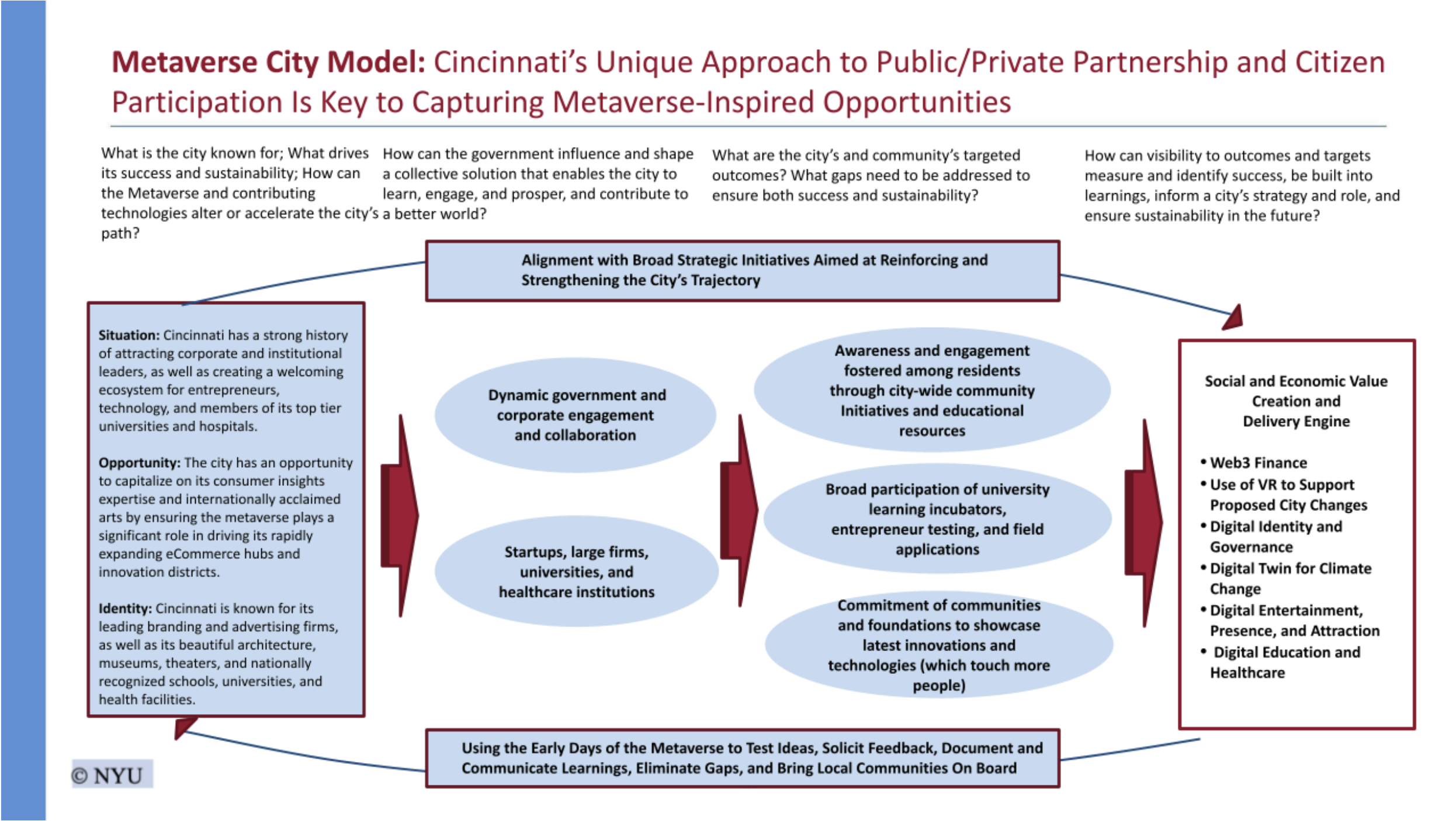 City Identity and Core Strengths: An Ability to Capitalize on an Enduring History of Public-Private Partnerships

Since then, Cincinnati has been attempting to regain, successfully in part, its status as a significant hub of commerce and innovation with the metaverse and its generous and surprisingly long-term and deep corporate partnerships, a part of that more recent effort.

At the core of these partnerships reside leading companies and institutions. Cincinnati is home to Procter Gamble, the largest consumer goods company in the world, and to Kroger, one of the largest grocers. The city is also home to one of the top three children’s hospitals in the U.S. and the headquarters for several leading financial institutions and insurance companies. With a limited budget of just $1.5 billion, Cincinnati has stretched its resources and impact by capitalizing on its history of public-private partnerships. Important initiatives made possible by these partnerships include universal pre-K, a transformative public transportation levy (supported by local businesses); and community-focused revitalization efforts made possible by 3CDC (a not-for-profit real estate development corporation) working in partnership with the city and large corporations.

Other community-focused and business-supported initiatives are being driven by partnerships at both the state and federal levels. Recently, Cincinnati received the largest federal grant in the city's history ($1.6 billion) to build a new bridge to replace The Frenchman's Bridge connecting Kentucky and Cincinnati. This bridge – which transports 30% of Cincinnati’s annual GDP -- had been in disrepair for 30 years so when the infrastructure bill passed, the city had a shovel-ready plan in place. With cooperation and partnership from local corporations, Cincinnati is also using its budget and resources to reclaim land used during the 1950s to build large interstate highways that ultimately destroyed historically black communities. An example is a project that has reclaimed over ten acres in Cincinnati’s West and Queensgate areas, which is now being given back to the community to create more black-and-white ownership.

Another example of the city’s commitment to public-private partnership (and sponsored by 3CDC) is Over-the-Rhine, a community that has been plagued by violence and drug addiction for generations and is located directly north of Cincinnati’s downtown area. To address this area’s problems, 3CDC with support from one of the area’s largest corporations, partnered with the city after recognizing Over-the-Rhine’s potential for economic growth. To launch this initiative, the city created two districts (and started with two projects) that were governed by the board and which, over the course of the past 20 years, have transformed this community, and several other communities, across the city. Before these partnerships took hold, these were communities that no one wanted to be in and yet now are cultural hubs for entertainment and tourism. Yet even with this level of success, the city of Cincinnati is still calling on its large corporations (P&G, Kroger, and the Cincinnati Bengals) and small businesses to transform even more communities. By cooperating with the city on a cohesive economic development strategy, city leadership sees the potential to “right size” its budget and pursue even more aggressive projects that will set Cincinnati up for a bright and prosperous future.

Cincinnati enjoys support from a broad range of players and influencers as it pursues both short term and longer-term initiatives. On the government side, two actors are driving the movement towards a metaverse-powered future -- InnovateOhio and TechOhio.

InnovateOhio: Under the leadership of Lt. Governor Jon Husted, InnovateOhio is advancing the DeWine Administration’s commitment to leading an aggressive, innovative path towards a better and stronger Ohio. The organisation’s mission is to look at every state service with an eye on the customer’s experience. The InnovateOhio team is looking at the entire customer journey – through different interactions with the state – to find ways Ohio can serve its customers better and at a lower cost. The driving premise is simple: using technology, Ohio can transform its communities and bring growth opportunities opportunities to parts of the state that have fallen behind – both in urban areas and rural communities. To this end, one of InnovateOhio’s projects is to help develop a state-wide broadband strategy to improve access to high-speed internet, thereby providing the necessary infrastructure for a digital revolution.

TechOhio: TechOhio represents a vibrant community of Ohio entrepreneurs and innovators helping grow the state’s technology economy. The group shares breakthrough technologies and cutting-edge research from innovative companies from across the state, with a particular focus on “Ohio Third Frontier.” The Third Frontier project, led by the state’s department of development, invests in local start-ups and supports their growth with a friendly regulatory environment and access to state resources or partnerships.

Targeted Outcomes: A Focus on Building a Digital Network That Capitalizes on a Web3 and Metaverse Technology Platform

To build the internet of tomorrow, InnovateOhio and TechOhio are partnering with private corporations and civil society organizations. The most important partners having an impact on these efforts are:

Kroger: As the world’s #3 grocery retailer, Kroger is constantly innovating and identifying new ways to improve the customer buying experience. With this goal in mind, the company recently announced a partnership with computer chip giant Nvidia to pilot the usage of digital twins in a new AI lab and demonstration center (to be located in Cincinnati).

Procter and Gamble: P&G is known worldwide for its continuous influence on the branding and advertising space, so it is no wonder the company has placed a central focus on metaverse technology and storytelling. The P&G LifeLab showcases virtual products and customer experiences that the company is working on and preparing to launch.

Contact CI: Contact CI is a rising metaverse player that develops hardware and software solutions for augmented and virtual reality. The start-up is set to launch a “first-in-market” use of its haptic glove technology for businesses this summer.

Harnessing the strengths of large incumbents (Kroger, P&G), the expertise of civil organizations (CCHMC), and the promise of new start-ups (Contact CI), Cincinnati is building a network that is oriented toward and prepared to support web3 and the metaverse.

Value Creation and Delivery Engine: An Eye on Engaging Public and Private Players and Inspiring Participation by Both Residents and Entrepreneurs

While Cincinnati is in the early stages of its engagement with web3 and the metaverse, the city has already managed to engage its residents and launch exploratory projects.

The most important project of this kind is being spearheaded by Cintrifuse -- an organization that has established a “Digital Rhine” task force of large corporations, city government agencies, academic universities, and start-ups who can bring the region’s metaverse/web3 capabilities to life. Cintrifuse offers connections, resources, funding, and mentors to entrepreneurs and other interested Cincinnati residents. Cintrifuse also participates in the organization of numerous events that have engaged the community and attracted talent. Examples include:

NFTxCincinnati: This event – hosted by a group of digital artists, collectors, and NFT enthusiasts – was designed to educate and create an inviting space for the public to learn about this tech-heavy concept (NFTs) and to provide the tools and knowledge to participate.

MidwestCon 2023: An immersive experience with over 500+ start-ups, professionals, investors, and entrepreneurs coming together to showcase the latest innovations and new technologies.

While it is too early to analyze the success of those events, Cincinnati has already managed to create popular engagement, infrastructure, and projects to deliver real value to its community.

Lessons and Conclusion: The Importance of Coordination, Access, and Corporate Commitment

Unlike some of our other city case studies, Cincinnati has not yet harnessed the power of the metaverse, but its early efforts represent a model for others to emulate. In particular, the city government has organized its strategy around three important components:

As the city develops into a digital powerhouse, Cincinnati will provide a blueprint for other mid-sized cities planning to use web3 and the metaverse to revitalize their communities. It will also serve as a model for cities interested in stretching their resources and budgets by partnering with the public sector to make private support all the more valuable.