Guanxi is more than a word; it is the Chinese term for the concept of building trust and having good relations with people you may want to do business with. Recently, NYU Center for Publishing MS in Publishing: Digital & Print Media students Jessica Awad, Gabriela Corzo, Teresa Sarmiento and I had the opportunity to practice guanxi with the organizers of the 25th annual Beijing International Book Fair (BIBF). We received an introduction to the Chinese publishing market from the organizers of the fair and through visits to three different publishers in Beijing. Treated with much generosity, we assisted at the Rights Club and the Digital Publishing Forum as well as worked with the fair’s International Press Center to gather valuable information for trade magazines all over the world.

On Tuesday, the day before the book fair officially began, BIBF hosted the Children’s Publishing Forum. Students assisted with welcoming and registering attendees while also listening in on the many presentations. At this forum, publishing industry representatives from China, Europe, the US and Japan discussed innovative ways to create worlds for kids, not just through books, but through comics, animations, films, TV, and products as well.

"One of the main topics discussed throughout the Children’s Publishing Forum –and the fair as a whole—was IP and the role it plays in publishing," Gaby said. "The idea was that you can create entire worlds out of a single creative concept, from books to movies to apps to products like clothing and toys, so why stick to a single paper book when you can embed your reader more deeply into the world your author has created? Having the book, plus an action figure and a blanket, keep a child involved in the story for longer than just the first read." 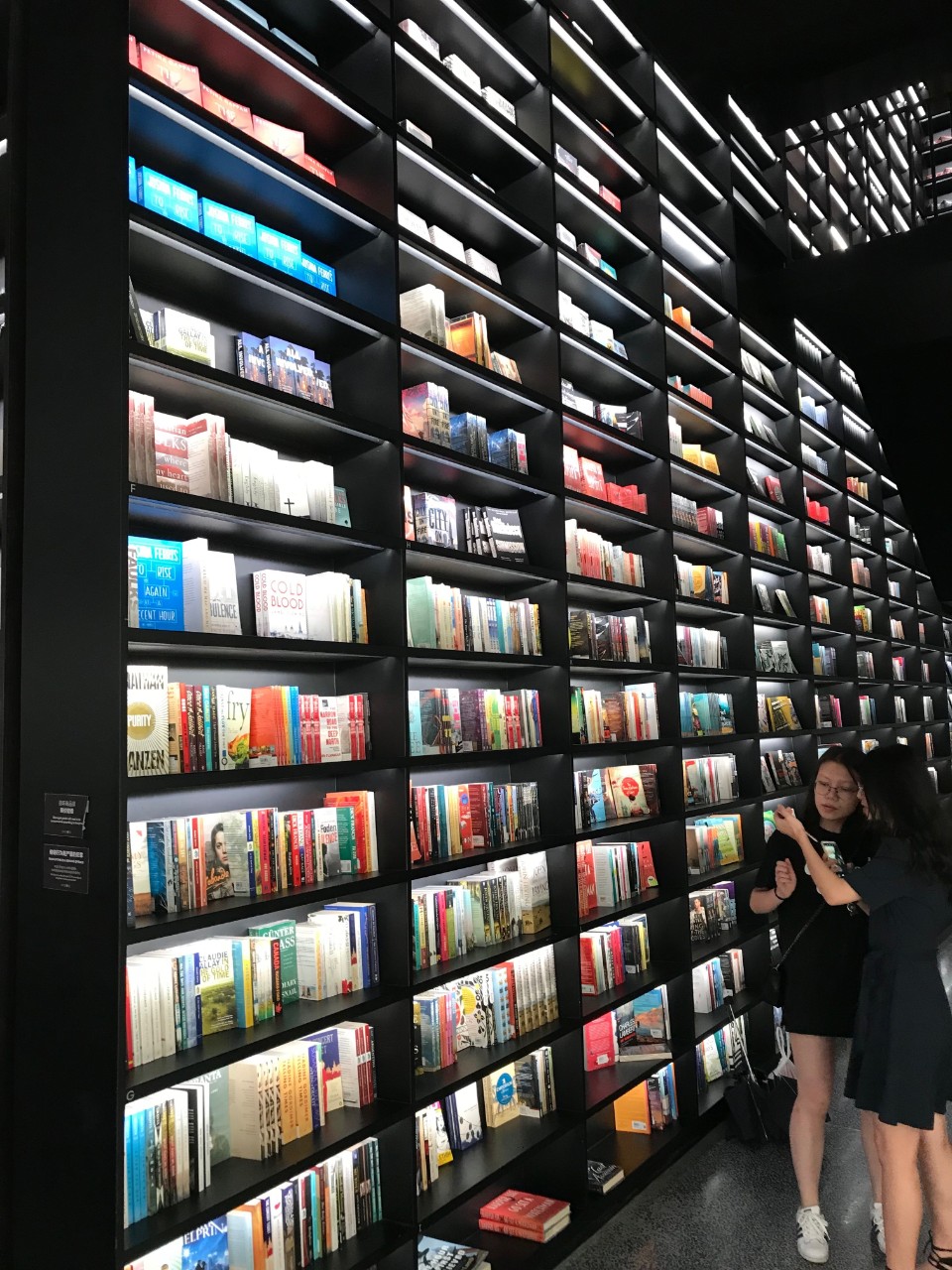 For the first two days of the fair, Gaby and Jessica explored the exhibitors’ booths in the massive venue with the International Press Center photography team. Their goal was to capture the unique aspects of the fair, such as the Hall Made in Creativity or the Picture Book Exhibition. Some of the pictures they helped get on the first day at the fair were on display on a screen in the front lobby of the convention center during the subsequent two days. The notes they took became leads for other stories or details for use in articles for English-language publications for the book publishing industry, such as The Bookseller or Publishers Weekly.

"It was fascinating to see how different the Chinese publishing industry is from that of the West," Jessica said. "Sometimes it seems like trade publishers get all of the attention here, but academic publishing and educational content play such a big role for Chinese publishers. Digital publishing is also very important, and while companies that established themselves by creating story apps and serialized book platforms have not always taken off in the West, they are actually doing well in countries such as China."

Gaby was amazed at the level of technology in the Chinese publishing market. "A publisher in New York can work internationally on a picture book by using a VR headset and connecting with the illustrator in London," she noted. A publisher can make licensing decisions on which country will best receive one of their YA books based on pattern trends. The possibilities are endless."

At the same time, Teresa and I managed the Rights Club, a new feature of the fair this year that provided a meeting space for agents and hosted small-scale talks like the Licensing Expo, a forum of industry experts in the area of licensing. Most of the people we interacted with, whether they were exhibitors or attendees at the fair, spoke only Chinese. It’s humbling to realize there’s a whole part of the world that doesn’t speak English. We tend to think the whole world speaks English or should speak English but here, it’s the other way around. Fortunately, our role was to make the Rights Club as welcoming as possible while ensuring that only exhibitors entered the designated section. 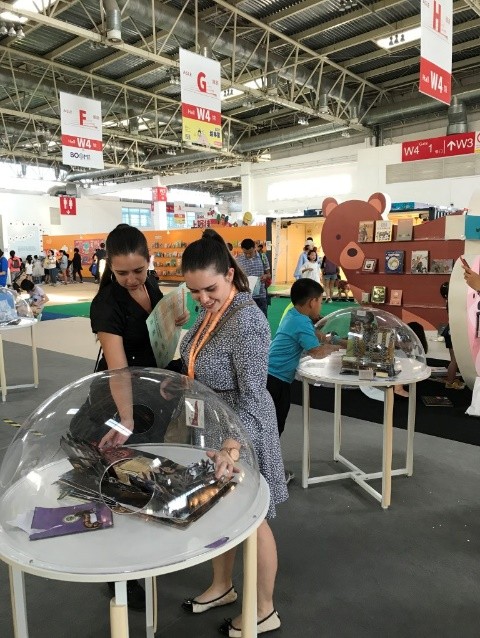 Teresa, who is from Spain, noticed that "while there were many UK and US publishers, there was no Spanish-speaking publisher. Although exhibiting at the fair was a huge opportunity for American and British publishers, other countries were not as well represented." The fair is still relatively young compared to Frankfurt and London, but is rapidly growing in size and importance each year, she observed.

One of the most exciting parts of the fair was the Picture Book Exhibition, a large, creative space with sections for children to play and read. "So many parts of BIBF seemed to center around children and their experience with books and creative expression," Gaby said. In general, the children’s exhibits at the fair were large and eye-catching, with flashing screens, stuffed animals, and bright colors. "I really loved what I learned about Children’s Publishing, and what Chinese parents want for their kids," said Teresa.

On the last day of the fair, Gaby and Jessica wrapped up the Digital Publishing Forum while Teresa and Amanda assisted the Press Center. "Going to the Beijing International Book Fair was a great experience," Jessica said, summing up the feelings of all four of us. "Sometimes it was challenging to try to take it all in, but overall, I am glad that I had the opportunity to see what the Chinese publishing industry is like and what is being published. I know that the organizers for BIBF want the fair to be about content and not just books, and this was achieved."

For the final day of our trip, we had the opportunity to visit the Forbidden City at the center of Beijing and the Great Wall, outside the city. Our tour guide shared with us the history of these amazing sights and how important harmony and balance are to the Chinese culture. Teresa said that the Great Wall “was the most incredible thing to see. We were only there for two hours, but I could have been there the entire day, hiking and looking at the views. It is worth a complete day, it was amazing.” With this opportunity to be a part of the Beijing International Book Fair, we have been fortunate enough to receive a glimpse of the innovation and importance of guanxi in the global publishing marketplace. 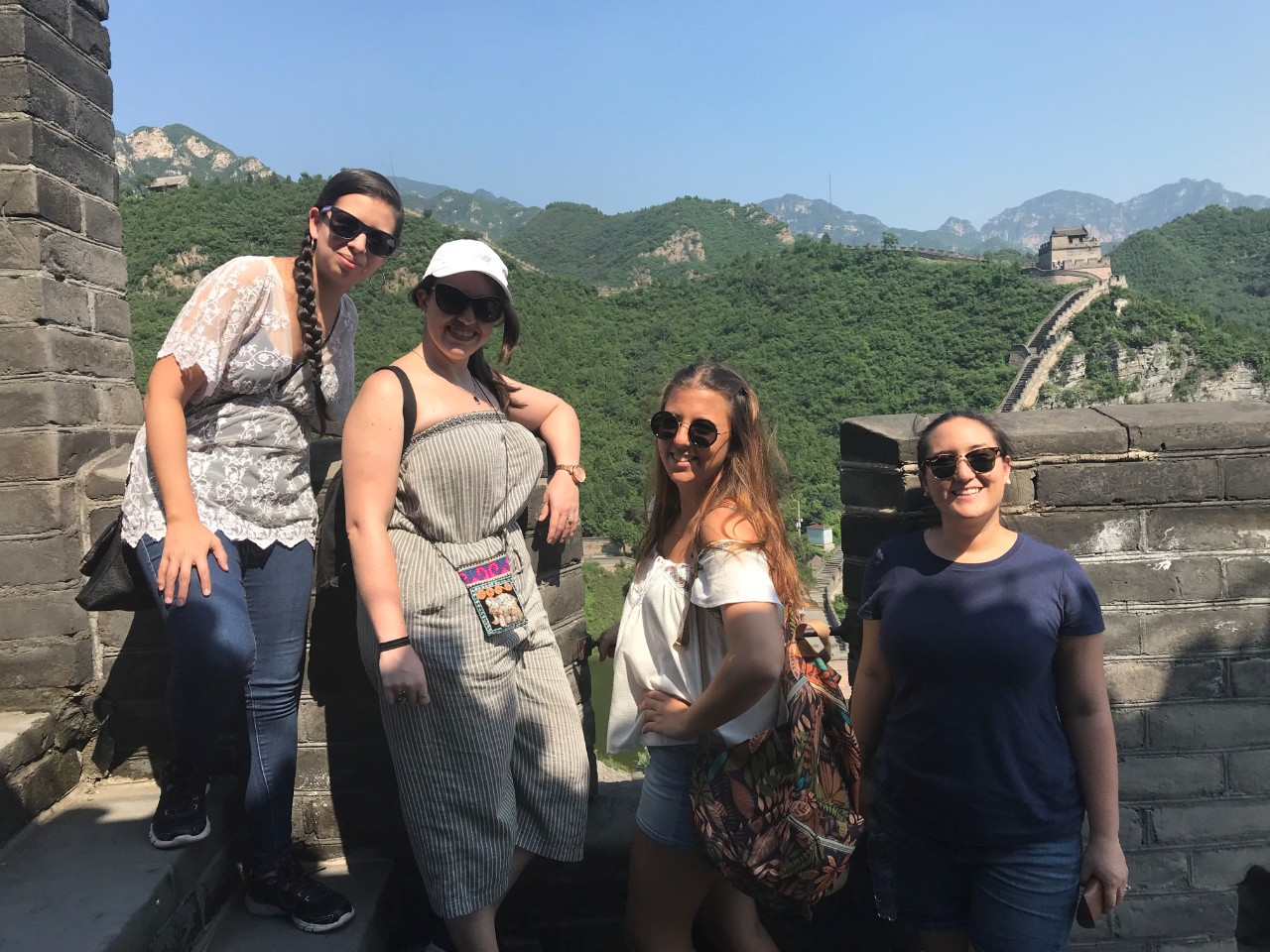