The Tor Tour: Sci-Fi and Fantasy at Its Very Best

For all of us science fiction and fantasy (SFF) lovers in the NYU MS in Publishing program, the chance to pay a virtual visit to Tor Books, one of the leading publishers of SFF, was as blissful as diving into the bestseller The Invisible Life of Addie LaRue by V.E. Schwab. Thanks to Lucille Rettino, Tor’s Associate Publisher, Director of Marketing and Publicity, who organized this virtual visit and assembled a team of Tor staffers, we were given an inside look at Tor, which is an imprint of Tom Doherty Associates, a division of Macmillan. The company has won every major award available in the SFF field and is continuously looking to new trends and voices in the genre. In addition to V.E. Schwab, Tor authors include major names such as Orson Scott Card, Nina Allan, Charlie Jane Anders, and many more.

During our visit, we heard from key members of the team, who explained what was currently trending and why. Tor has begun to see a growing interest in “softer” SFF, as opposed to “hard” SFF, which is typically concerned with plausible logic and scientific accuracy. “What’s working with our debut authors is a kind of crossover that’s not quite classic science fiction or fantasy, but something that uses classic tropes and turns them on their head. I feel like that’s what we’ve seen start to work really well,” said Senior Brand Manager Alex Cameron.

This new breed of fantasy is different from the complex, fantastical worlds people expect from traditional SFF. Eileen Lawrence, Vice President, Executive Director of Marketing, commented on the expansion of the SFF genre: “We’re now publishing authors like T.J. Klune (The House in the Cerulean Sea), who writes fantasy LGBTQ+ stories. We have Gideon the Ninth (Tamsyn Muir), which is kind of quirky and fun science fiction. These are not necessarily these huge, huge epic books.” It’s no secret that the publishing landscape is continuously changing, and Tor is successfully adapting to society’s shifting perspective on the SFF genre.

During our visit, NYU publishing students were able to learn in depth about one of these “softer” SFF novels in particular, the mega hit Addie. With the possibility early on that Addie could garner major popularity, the Tor team began planning and doing their best to make this book as marketable as possible for mainstream media. Creative Director Peter Lutjen noted: “We loved the covers of [Schwab’s] earlier titles, but we felt that they wouldn’t necessarily appeal to a mass audience. The editor wanted it to look like what we call a ‘big book’.”  They also wanted an element of magic, and the resulting cover with bold type and intersecting stars says it all. With the excitement surrounding this new book, Publishing Operations Senior Manager Michelle Foytek was in charge of getting out multiple editions for different audiences. “Addie had seven print editions upon publication and two more a year later,” she noted. These special editions included alternate covers, colors, author signatures, and more. Foytek was also able to get Addie chosen for OwlCrate, the popular monthly subscription box, which helped increase sales and generate buzz for the book. 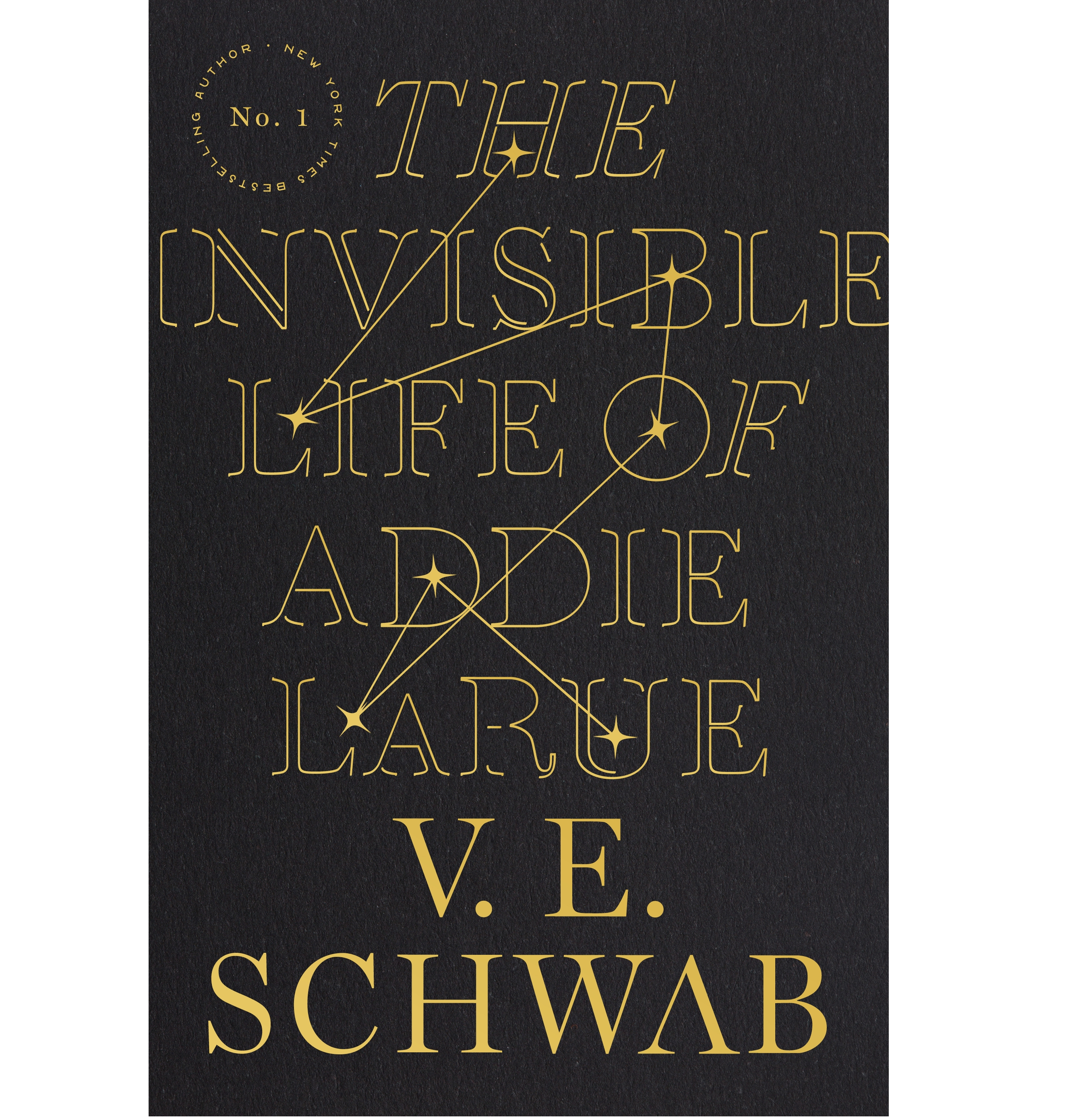 The resulting cover with bold type and intersecting stars says it all.

As publication neared, Lucille Rettino was attending big book events, getting advance copies of Addie into the hands of major booksellers. With many major booksellers becoming interested, Addie received more and more press, especially outside of Schwab’s already existing fanbase. Rettino emphasized to us how important it is for a book to be promoted as much as possible in order to do its best when published.

A major challenge for the Tor team was the timing: Addie was published on October 6, 2020, just after the beginning of COVID. Tor lost opportunities for in-person publicity, specifically events such as author signings. Executive Director of Publicity Sarah Reidy spoke about the struggles of planning events during COVID. The main difficulty was making virtual events just as interesting to consumers as in-person events. Reidy said, “We decided to pick conversation partners across genres to give each event a unique feel.” These partners ranged from Madeline Miller (The Song of Achilles) to Tochi Onyebuchi (Riot Baby), authors of different genres who reach different demographics. Because of this, Schwab was able to capture the attention of a far vaster audience than she otherwise would have been able to, given the limits of in-person gatherings.

The Invisible Life of Addie LaRue debuted at number four on The New York Times Best Sellers list and remained on the list for the majority of 2021. Its success said volumes about the power of savvy publishing and the new, “softer” face of SFF that can reach wider and more diverse audiences. Students left the event with a new understanding of SFF publishing and a feeling of optimism: every day genres are becoming more diverse, presenting opportunities for new stories to be told in exciting and engaging ways.

Kenli Young is a first-year MS in Publishing student. She graduated with a BA in English Literature from Lee University. Kenli hopes to continue her career in the publishing industry as an editor, working on books by new, diverse authors in order to help them share their stories.