"Everything we do is for the kids," said Ken Geist, Vice President and Publisher for Scholastic Trade's 0-8 publishing division. From the Scholastic Book Fairs where children get to choose which titles they buy, to the "cute and appetizing" cupcake books that give babies a full-sensory experience, Scholastic is all about serving the youngest readers.

NYU MS in Publishing: Digital and Print Media students recently toured Scholastic’s newly-renovated headquarters and received an inside look at how the world’s largest publisher and distributor of children’s books operates. Ellie Berger, Executive Vice President and President, Scholastic Trade Publishing graciously hosted us and assembled key members of her team to tell us about different aspects of the company. She explained that Scholastic publishes approximately 650 books a year, and that the ideas for the books are often generated in house, permitting for the company to control the intellectual property rights.

Scholastic is responsible for 50% percent of children’s books published around the globe. Their astonishing backlist includes world-renowned series such as The Hunger Games, The Magic School Bus, Clifford the Big Red Dog®, and The Babysitters Club, as well as the U.S. rights to Harry Potter. 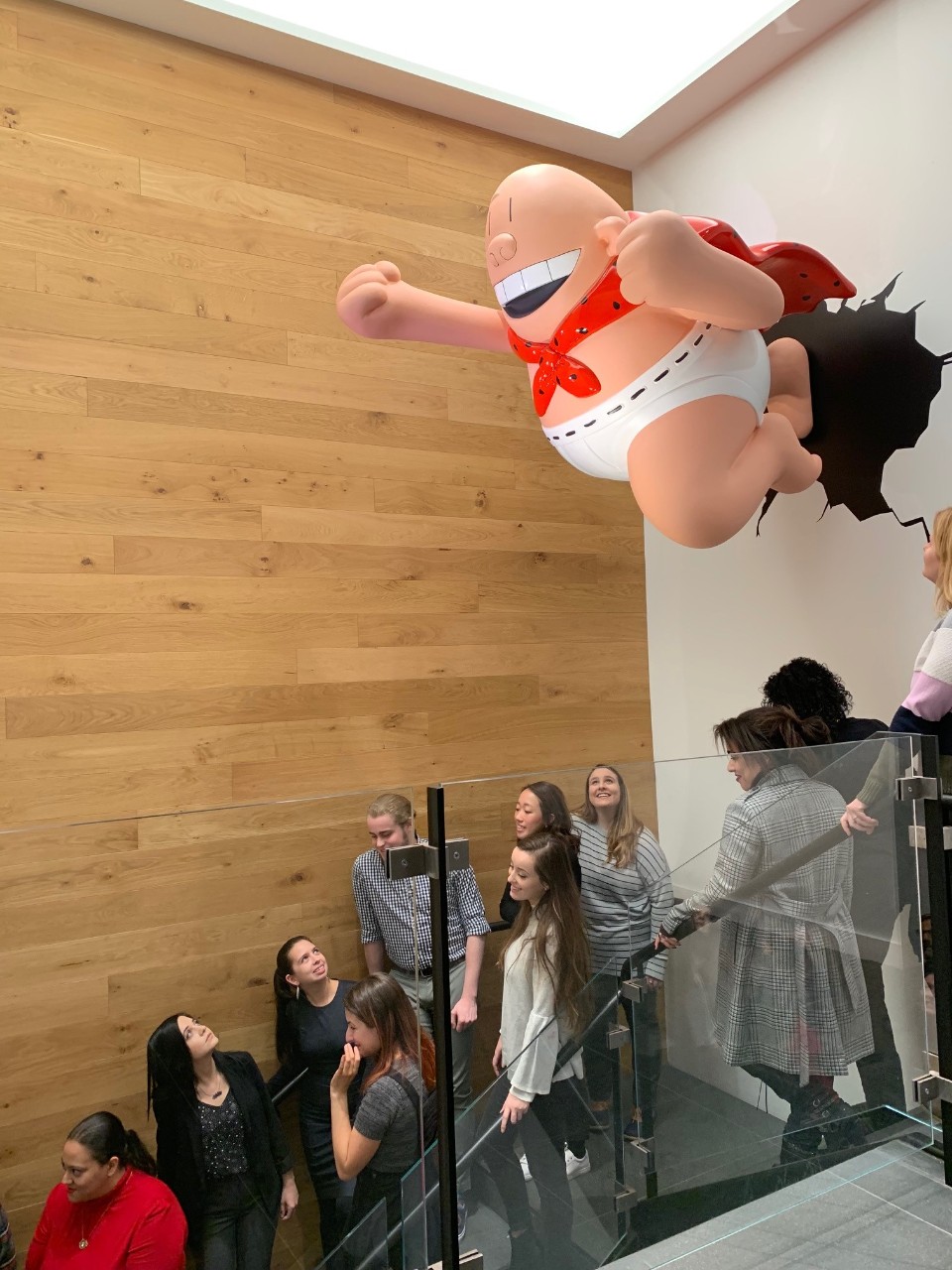 According to Geist, the children’s book market is an "insatiable beast." "There are new 6-year-olds every day!" he joked. His team has to keep their fingers on the pulse of the latest trends to constantly create exciting content for young readers. One example relates to the time James Corden invited Sophie Turner and Josh Groban to join him in performing the "Baby Shark" song on Corden’s show; the popular kids' song had been the subject of a dance challenge that went viral. Geist was quick to develop the public domain property into an immensely popular picture book that has more than 250,000 copies in print since December 2018. His team has also begun to publish books that teach foreign languages, such as My First Mandarin Words with Gordon & Li Li. "Kids aren’t given enough credit. If they can learn the types of dinosaurs, then they can learn languages," he notes. He also does not shy away from topics like ADHD in Peter Reynolds' Happy Dreamer or the freedom to sing (and speak) at any cost in The Rooster Who Would Not Be Quiet! by Carmen Agra Deedy and Eugene Yelchin. Non-fiction books are also very important at Scholastic; Geist is excited about the May publication of The Astronaut Who Painted the Moon: The True Story of Alan Bean by Dean Robbins, illustrated by Sean Rubin, about the fourth astronaut to walk on the lunar surface.

To help us understand how Scholastic’s books are marketed, Ellie Berger introduced us to Tracy van Straaten, Vice President Trade Communications, Publicity, and Educational Marketing. "We’re one of the few trade publishers with a recognizable brand," remarked van Straaten. Almost everyone is familiar with the company because of the Scholastic Book Club flyers and the Scholastic Book Fairs held every year in schools around the world. The fairs are unique events for students who get to see titles displayed prominently on racks and can make their own selections. The Scholastic Book Clubs and Book Fairs offer lower-cost titles to suit readers at every income level. "We go to everybody," van Straaten assured us. Part of Scholastic’s mission is to find "the right book for every kid." 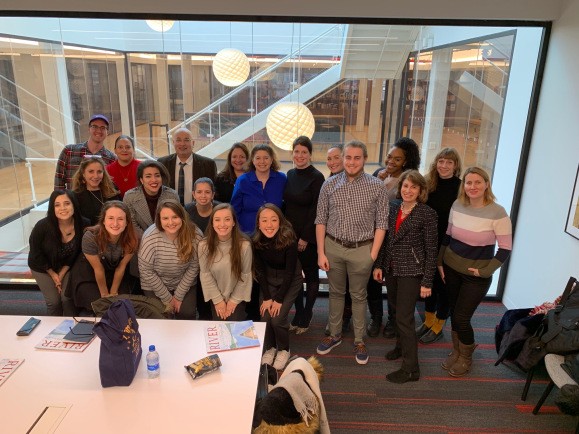 From the book fairs, the company is also able to gather important information about their target audience. This kind of information has been invaluable for the children’s entertainment pioneer, leading them to develop their graphic novel imprint Graphix in 2005. "We were the first children’s publisher to have a graphic novel imprint," van Straaten notes, "and it’s now the fastest growing market for young readers."

Scholastic operates around the world, and a significant part of the business is licensing and translating books to foreign markets. "We have world rights to most of our titles," explains Jennifer Powell, Director of Rights and Co-Editions. What sets Scholastic apart is that they "work directly with [international] publishers," ensuring that the book fits the market it is entering. For instance, she had to change the cover of a Christmas title for its Japanese release, eschewing the decorated tree for Japanese decorations more likely to be associated with the season. Scholastic also brings international books into the United States. A recent title from Australia had to be edited—Americanized—so kids would understand the jokes. "Humor is hard to translate," Powell shares. Potty humor is quite common in America and Great Britain, but is taboo in France – and don’t even think about alphabet books. "A is for Apple’ doesn’t quite work in other languages," she explained. 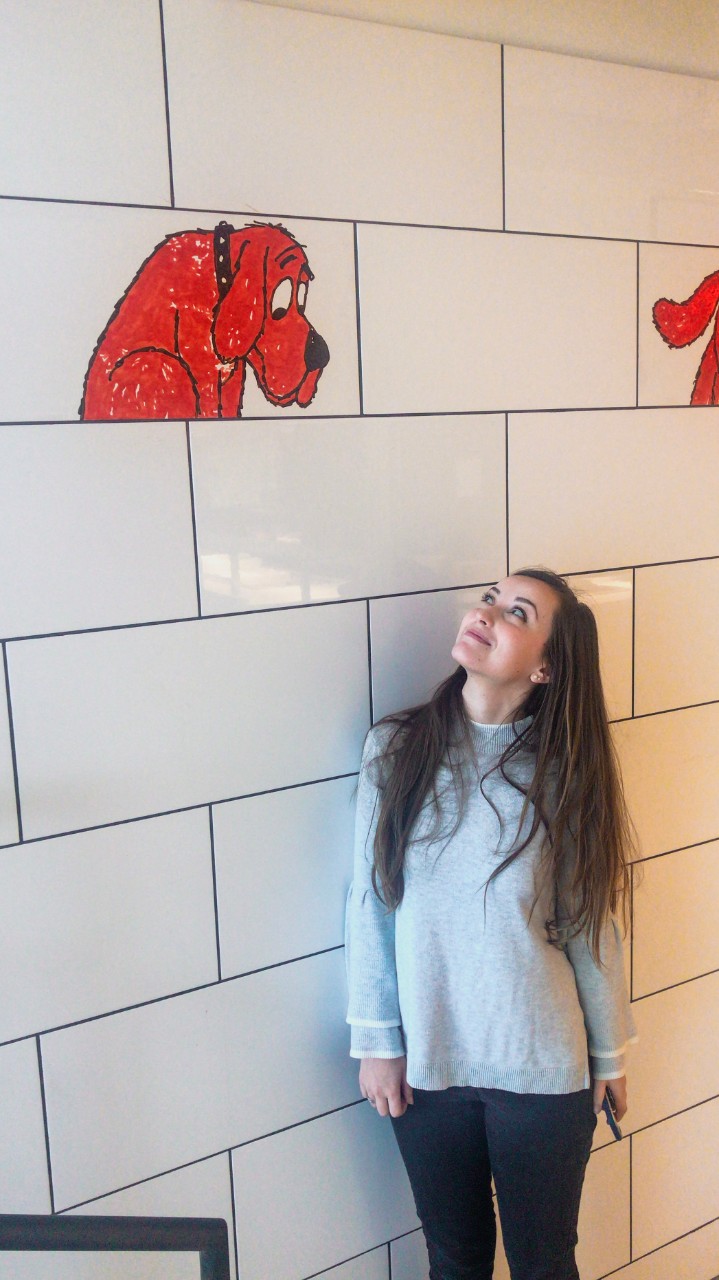 One challenge is always knowing your audience. As van Straaten puts it, "You’re selling to the child reader, and to the adult buyer—the gatekeeper." Children’s book marketers have to explain to these gatekeepers why their books are valuable. All independent reader books are vetted by education specialists to ensure the material is appropriate for the child’s level. As for the reader, Scholastic endeavors to associate reading with fun. That can mean creating books around familiar properties like Pokémon to entice kids into becoming lifelong readers.

Scholastic began as a classroom magazine in 1920 and has grown into a global publishing and education company because they know what kids want. For almost a hundred years, Scholastic Inc. has been building a brand that children, parents, and educators trust. The longevity and reach of Scholastic is testament to its devotion serving children’s interests and to the deep understanding the company has of its market.