"You want to be sure you know what makes you happy, what you want to contribute to journalism, and how you want to move forward."

These words of wisdom came from Vanessa K. De Luca, former editor-in-chief of Essence. De Luca delivered the keynote address last week as current and past SPI students came together to celebrate the 40th anniversary of the NYU Summer Publishing Institute (SPI).

Andrea Chambers, Executive Director of SPI, gave the opening remarks. She detailed how times had changed in her 12 years as director. When she began, the program taught traditional magazine and book publishing; now, students are spending time in video editing workshops, listening to speakers from digital-only magazines like delish and Quartz, and hearing about the future of artificial intelligence. 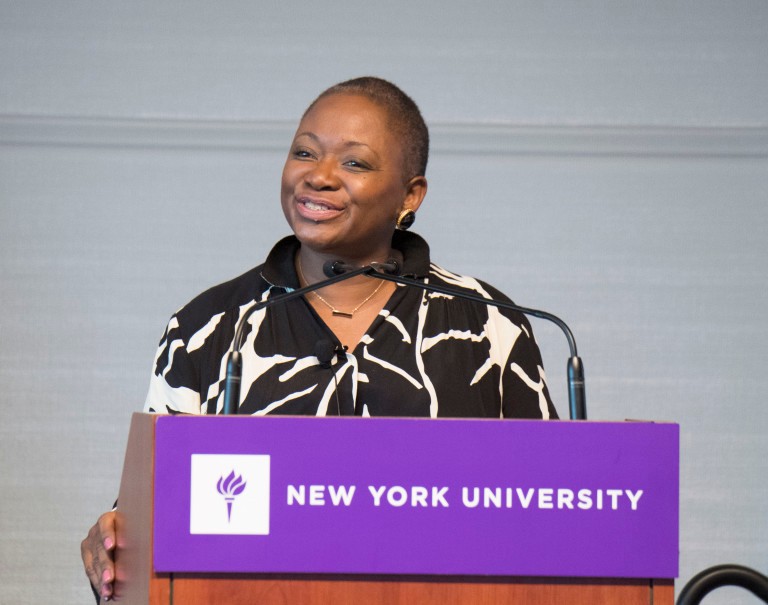 It’s difficult to know just how much the program has changed over 40 years, given that there are few records from the early years. The few existing documents and the memories of past students revealed some significant changes. The program was taught initially at The New York University School of Law instead of the historic Woolworth building; students came together for a few weeks of general publishing study, and then picked a magazine or book track. They produced final projects, and those in the magazine session all revolved around movies! No one is quite sure why.

The highlight of the event was a six-member panel featuring alumni from each decade of SPI. Magazine Media director Lauren Purcell, class of 1993, moderated the panel. She attributes her career to connections she made at SPI. What brought her to SPI from a career that included positions at Harper’s Bazaar, American Health for Women, SELF, and, most recently, Rachael Ray Every Day, where she was Editor-in-Chief? According to Purcell, the opportunity "to give back to a program that gave me my career, essentially."

The speakers on the panel impressed upon the audience the importance of being ambitious and persistent. Sylvia Barsotti, a member of the first class of the SPI in 1978, told us about her meeting with a speaker who was working on a new magazine, Women Who Work. "I wanted to be on that magazine,” she said. “I called her every week after that." She eventually became a production assistant for Family Circle, and then landed an editorial assistant role after eight months.

Judy Hottensen, class of 1982, is the Associate Publisher of Grove Atlantic. She began her career at the Village Voice, and sought an editorial role—to prove to her bosses how much she wanted it, she enrolled in the Summer Publishing Institute.

Marshall Crook, class of 2005, reminded us that it will take time to land that dream job. He started out with an unpaid internship at US Weekly and made money lifeguarding at a hotel. It eventually paid off—he moved up in time to a video producer job at The Wall Street Journal and is now a senior producer at NBC News Digital. And Richelle Szypulski, a recent graduate from 2015, gave us advice about how to go about nabbing that first job: "Find all the career sites you could possibly want to look at, bookmark them, and click through them every morning." SPI landed her a job, as well—she applied for a position and reached out to a speaker she had connected with; when the position she applied for was filled, the connection found her a better fit. She’s now the assistant digital editor at Travel + Leisure.

The panelists also gave us a glimpse at how we might be rewarded for our perseverance. Josh Marwell, class of 1980, shared his thoughts about his first job in sales after plenty of rejection letters. "I was driving along in the car," he said, "and I thought, 'They’re paying me for this; this is so much fun.'"

In this program, students hear from amazing speakers. We also hear from alumni and learn about all incredible things they go on to do. It is, at times, intimidating; it’s hard for us to picture ourselves in the shoes of those who once sat in the SPI seats. But alumni and speakers alike continue to reassure us—they confess their own struggle sending out endless applications and getting rejected. But they and the program directors have given us the tools to succeed, and the inspiration to fight until we land the job we dream about.