At the Vox Media headquarters you’re more likely to see jean shorts and Birkenstocks than blazers and ties. While waiting for our guides to show us around the workspace, I glanced up at a ceiling full of exposed concrete and wires (the latest look for media and technology companies) and then into the company café where a whole lot of 20- and 30-somethings sat hunched over Mac laptops, drinking coffee and laughing with co-workers. Our group of NYU Summer Publishing Institute students was very excited about our first media visit. (Meanwhile, other student groups checked out Nylon, O, The Oprah Magazine, Time Out New York, The Cut and Pitchfork).

"It’s not a massive office, but there’s still a lot to see," said Senior Manager of Communications and Public Relations Carly Walsh, when she caught me deeply engrossed in the work environment around us.

During a tour of Vox Media's conference rooms, internal creative agency, and in-house recording and video studios, I noticed everything from a mannequin head with retro headphones to innovative conference spaces—some decorated like apartments. Our guides, Walsh and co-worker Madison Gouveia, Communications Associate, also highlighted multiple "Instagrammable" work nooks scattered around the headquarters. 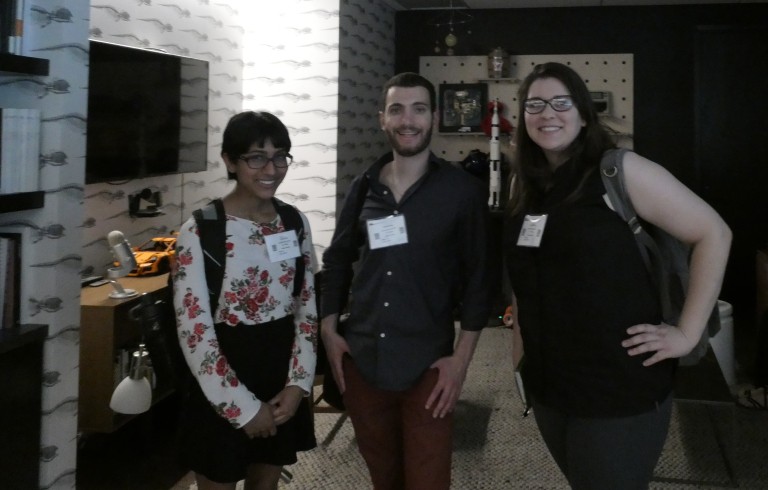 With a strong idea of the creative, young, and open atmosphere of Vox Media, we headed to a conference room to find out a bit more about the people who give this office space its personality. “Take an affirmation,” said Carly, while we settled around a big white table. “It’s a Vox Media thing.” As I read my Marie Curie inspirational quote aloud (“We must believe that we are gifted for something, and that this thing, at whatever cost, must be attained”), I couldn’t help but hope that I was indeed gifted for something and that this trip to Vox Media would just maybe help me attain it.

Vox Media encompasses a significant handful of leading digital brands. Though they started small in 2006 with SB Nation (fun fact: the SB stands for Sports Blog), Vox Media has since launched The Verge, Racked, Eater, Curbed, Polygon, Recode, and their namesake Vox— not to be confused with their parent company, Vox Media. Though these channels cover everything from interior design (looking at you, Curbed) to video games (that’s Polygon’s domain), each brand is united by a common purpose epitomized by the tagline Go Deeper. “We’re creative people ourselves,” said Walsh.

The four Vox Media staffers who sat down to talk to us proved that to be true. Christina Cerullo, Executive Creative Director at Vox Creative, explained that the mission of her division is to serve as an internal advertising agency, providing what she calls “high fidelity advertising content and signature video” to companies interested in branded content. “There’s so much opportunity out there to flex creatively,” she said. “You are problem solving every day.” Cerullo and her team have worked on everything from exploring the mission to send a chicken sandwich into space to crafting video content for a MailChimp ad debunking the myth that stegosauruses have brains in their hindquarters—talk about doing something different every day.

Though branded content is a major part of Vox Media’s business plan, Sonia Chopra, Director of Editorial Strategy at Eater, spoke to the clear line between branded and editorial content. Despite the differences and separation, editorial content and outreach are no less exciting than their branded counterparts. “We [once] rented a ferry and handed out pizza to everyone,” Sonia told us, in order to promote what Eater loves most: food. 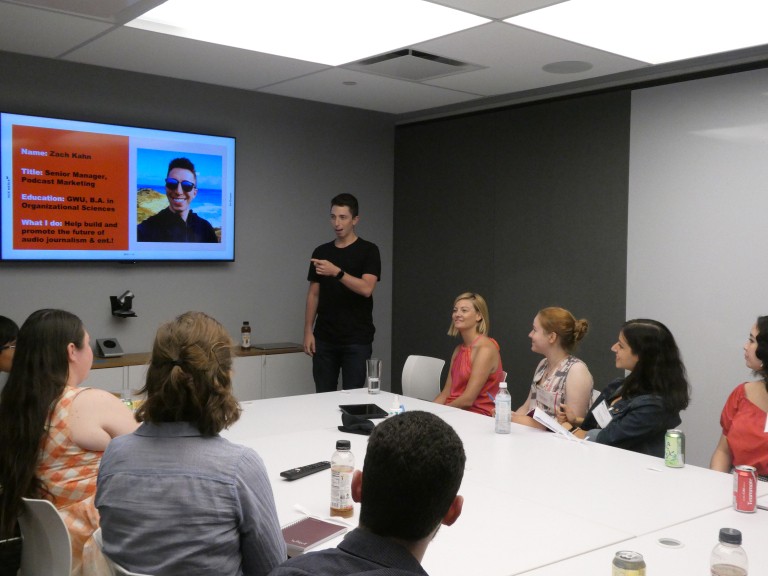 Up next came Zach Kahn the Senior Manager of Podcast Marketing at Vox Media, who got into podcasts through a podcast,” he joked. Kahn explained how he entered a contest he never expected to win while listening to Recode Decode and was subsequently hired after attending a Recode conference. Now, Kahn spends his days "looking for an original hook, a business opportunity, and a chance to expand beyond a single podcast."

As a self-proclaimed podcast enthusiast, I sided with Zach when he claimed, "You’re getting a much deeper dive than if you watched CNN for a couple minutes." He continued, "[And] the depth of engagement will continue to grow." Personally, I haven’t watched broadcast news in years, opting instead to listen to a whole lot of news podcasts. Luckily, according to Zach, I haven’t missed much.

Asad Syrkett, the Deputy Editor at Curbed, tied up our Vox Media visit with a plunge into the world of architecture and interior design. "Photography is like a big thing at Curbed," he explained as he showed us images of perfectly crafted homes and spaces. "Our audiences are so loyal," he noted. "We’re learning to get at them all across the internet, which is so cool."

Syrkett has been working for Curbed for six months and said, "I still have a lot to learn." Fortunately, it seems as though Vox Media allows their community of professionals to do just that in a workspace that is bold, engaging, and modern.

Upon exiting 85 Broad Street, I had only two questions. One: How can I set myself up to wear Birkenstocks to work every day? And two: Is Vox Media hiring?