“What do you want to learn today?”

This is a question that students, in my experience, are rarely asked.

From elementary school to college, we are told what we supposedly need to know. It says on the syllabus what one will learn in the next hour, day, or week. Learning becomes less of a choice, and more of a passive experience. The student is the passenger in this experience.

James Levine, Principal of Levine Greenberg Rostan Literary Agency, made sure that his time spent with the students of the NYU Summer Publishing Institute would be markedly different. Levine and a group of other leading literary agents were there to help us understand their jobs and how books are acquired, first by agents and then by publishers.

Before the auction began, the auditorium was abuzz. The five literary agents and a few assistants in attendance were circulating, asking students what they wanted to learn, while handing out 15 envelopes.

"We learned," Levine announced, "that most of you just want to know what [this] panel is."

After laughter and a brief introduction of the other agents, Levine asked another question: "How many of you are taking this program to get a job?" Many hands shot up. "Good news: for the next hour, you’re all hired."

Inside of each manila envelope were wristbands, demarcating what publishing company, imprint, or division the students would be assigned to in the upcoming role-play session. Some of us were assigned to Crown at Penguin Random House, some to St. Martin’s Press at Macmillan, some to the new Celadon imprint at Macmillan, and so forth. (Remember: we were all “hired” at least for the day!) We were all going to bid to acquire the hottest title on the market: The Woman Across the Street Above the Bodega In the Bathtub in a mock auction. (The agents came up with the title right before the session, and we all loved it!) The manuscript under discussion was co-authored by a high school English teacher, role-played by Rachel Sussman, co-founder of Chalberg & Sussman, and Josh Getzler, a founder of the HSG Agency; Josh played an accomplished writer very sure of himself. The goal of this exercise, played out with great verve and excitement, was to show us what literary agents actually do and how manuscripts find their way into the marketplace.

After writing a manuscript, the first step for a writer, we gleaned from some award-winning acting from Getzler, is to find an agent. But how does one become an agent, let alone begin to find one?

We learned that there really is no correct route to becoming an agent. Agents come from all different career paths, and authors, in a variety of ways, find them. Getzler, for example, started out owning and operating a minor league baseball team before becoming a top agent.

We were told that an author submits a manuscript to multiple agents in the hope that one will want to take him or her on as a client. And do NOT, it was emphasized, contact an agent by sending out an E-Blast to all of the major agencies. 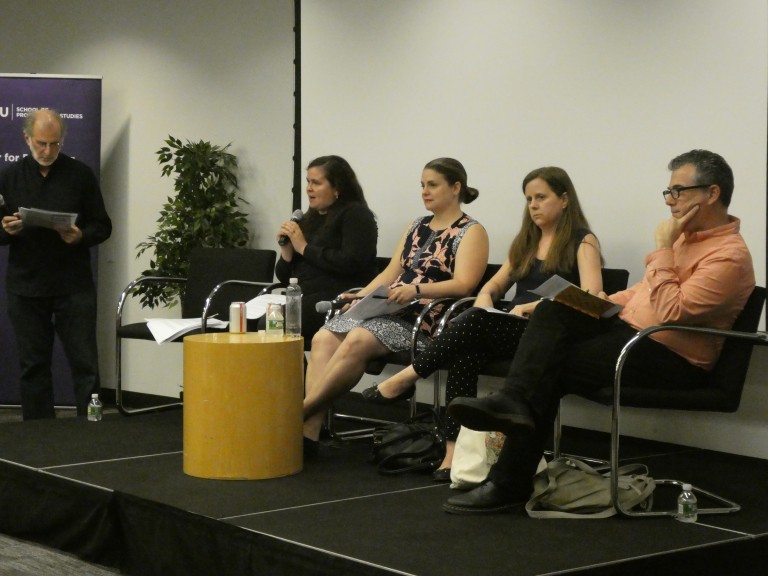 In the case of our mock auction, Getzler and Sussman (in their role as co-authors) selected two agents to review their manuscript: Kate McKean of the Howard Morhaim Agency and Kristyn Keen at ICM Partners, both of whom were very interested in signing up the two authors. McKean thought the extraordinary length of the title could be a plus.

After the agents made their pitch, the authors determined that McKean would best suit the project. She then sent the manuscript out to 15 imprints to gauge the market. Dominic Yarabe, assistant at the Levine Greenberg Rostan Literary Agency, played the role of Amy Einhorn of Flatiron Books at Macmillan; she was so excited that she offered $250,000 to pre-empt the book, meaning take it off the market with her bid.

The agent and the writer then conferred; the students, wearing their faux publisher hats, whispered amongst themselves. This was more money than any of us had ever seen before. It seemed too good to be true. “She should take the money from Einhorn and run!” some of us thought.

"We think we can get more," the authors announced, to gasps from the crowd. Levine remembered that one year a student (in her publisher-for-an-hour role) was supposed to bid $1,000,000 on a book, but could not bring herself to offer up this sum of money.

And so, the two-tiered best bid auction began, wherein all 15 houses were allowed to bid their best offer in the first round. Emerging from the first round were 12 disappointed houses and three elated ones: Simon & Schuster, Little, Brown and Company, and Knopf conferred among themselves as to what their bid in round two would be.

Eventually, the authors decided to go with Little, Brown and Company, whose publisher, Reagan Author (played by SPI’s Executive Director Andrea Chambers) was actually the under bidder at $1,000,000. Still, the authors felt confident that Little, Brown’s list represented the “perfect mix of literary and commercial,” and that the company would do the best job publishing their book. (Shows you that sometimes money isn’t everything in publishing.)

Throughout this mock auction, the students learned a great deal. We were introduced to a high stakes environment where the value of a book can fluctuate rapidly in minutes. We learned that the agent is there to serve as the psychologist, therapist, and advocate for an author. We began to see why the agent was, and is, so necessary.

"The truth is," Getzler said, "you need three qualities to be a great agent: determination, ambition, and hustle."

I have to think the entire class agreed.

Before the students could mob the agents with questions at the end of the auction, Levine closed with a quote SPI students will remember for a while to come: "If you want to be an agent," he said, "Welcome to the casino!"