The Frankfurt Book Fair, the world’s largest international book fair, celebrated its 70th anniversary this year. With more than 100 countries represented, the huge event brings publishers, agents, sales reps, and authors together. Recently, three NYU MS in Publishing: Digital & Print Media students had the opportunity to attend the Frankfurt Book Fair and help out in various areas including the Arts+ venue, the new Frankfurt Kids hub, and with the "Show Daily" produced for the fair by the international newsletter, Publishing Perspectives. But at the heart of this year’s fair, amidst all the great programming, exciting keynote speakers, and buzz about "big books of the fair" was something much bigger than our industry: global politics. It was very clear that books cannot be divorced from the cultural climate and political backdrop.

For context, we left New York for Frankfurt minutes after Brett Kavanaugh was confirmed as an Associate Justice of the US Supreme Court. Seven hours later we landed in Germany, which was preparing for its own significant election that would illuminate the deepening division in the German electorate. These two events bookended the Frankfurt Book Fair itself. Hence politics and human rights were leitmotifs of the literary event.

On our first official day at the fair, students Zoya Khera, Amanda Orozco, and I were able to attend the opening press conference that set the stage for the rest of the week. Taking the podium, Chimamanda Ngozi Adichie, feminist icon and beloved writer, captured the attention of the press and publishers with a moving speech on women’s visibility, particularly women of color, in literature. She stressed the necessary action needed to amplify women’s narratives. A sea of listeners wearing translating headsets nodded in agreement as she said:

"Art can illuminate politics. Art can humanize politics. But sometimes, that is not enough. Sometimes politics must be engaged with as politics. And this could not be more urgent today… We must invent new ways of doing, new ways of thinking… This is a time for boldness in storytelling, a time for new storytellers. It is important to have a wide diversity of voices-not because we want to be politically correct, but because we want to be accurate."

Given the timing of the book fair, her words resonated strongly with us. Amanda was struck by Adichie’s composure and passion: "She was very firm in calling out the big and small ways that women are dismissed, belittled, or abused and in asserting that women’s stories are more important now than ever." Adichie was joined on stage by Heinrich Riethmüller, President of the German Publishers & Booksellers Association, and Juergen Boos, Frankfurt Book Fair president, both of whom gave a nod towards the important of diversity and free speech in their remarks. Adichie’s words were a bold challenge for publishers and underscored the message that our mission in publishing is more than books, more than stories.

Throughout the week there was a clear focus on art and politics, including the concurrent 70th anniversaries of both the fair and the United Nations ’Universal Declaration of Human Rights; Zoya worked in the first-ever Frankfurt Kids Foyer, which focused on new and small children’s publishers from around the world with a "walkable catalog," featuring bright shelves of hundreds of international children’s books. The hub featured the guest country of honor, Georgia, and had constant programming with publishers speaking about trends in their countries, including how children’s publishers are embracing multimedia. Of her time there, Zoya shared, "It was fascinating to see shelves full of beautiful children’s books in various languages."

I spent time in the Arts+ section, which is dedicated to innovation in the arts. The Dutch company I worked with, Dropstuff.nl, curated an interactive fairgrounds exhibit that brings Dutch culture—from music to food technology and video games—into the modern technological world. They were one of many stands to showcase the question of how we can use the digital world to improve, preserve, or promote cultural history.

Finally, Amanda had the opportunity to work with Publishing Perspectives to get impressions from international publishers and exhibitors throughout the fair. One of her most memorable interactions was with a small publisher from Morocco that publishes books on women’s issues. Amanda noted, "The founder was so passionate about what she did and though her publishing company was only five years old, she was extremely optimistic and excited about the fair." 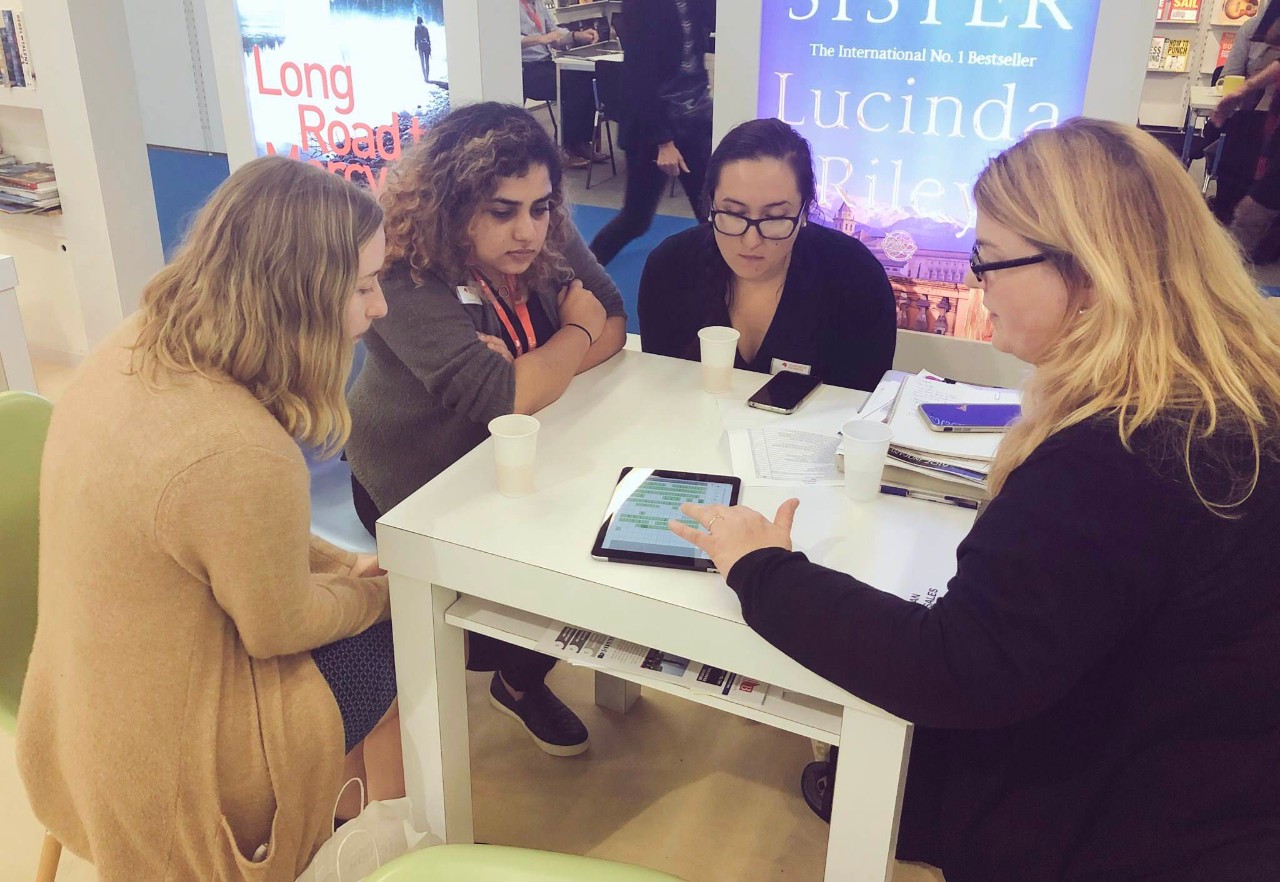 The three of us also had a chance to visit with Holly Ruck, Senior International Sales Manager at Macmillan, who sat us down and explained her role at Macmillan, which celebrated its 175th birthday during the fair. Explaining her packed day of meetings and curated catalogs, Holly mentioned that these meetings are so important because they are an opportunity to find common ground in international markets and put faces to sales accounts. “Rather than just send more stock, we strategize about which titles to send them,” she said. In these meetings, Holly and her team tailor orders to each country’s interests and trends. “Who knew manga was big in Bulgaria?” she noted, pointing to some of the exciting trends she learned from chatting with booksellers from abroad.

In her opening keynote, Adichie challenged publishers to find a new way of doing business that is inclusive and inspired. With its throngs of engaged international publishers, the innovative programming and the intersection of culture, art, and politics, Frankfurt 2018 clearly took on her challenge. The three of us could not imagine a better experience than seeing members of our global industry come together with a driving resolve to find the boldness in storytelling and in business. 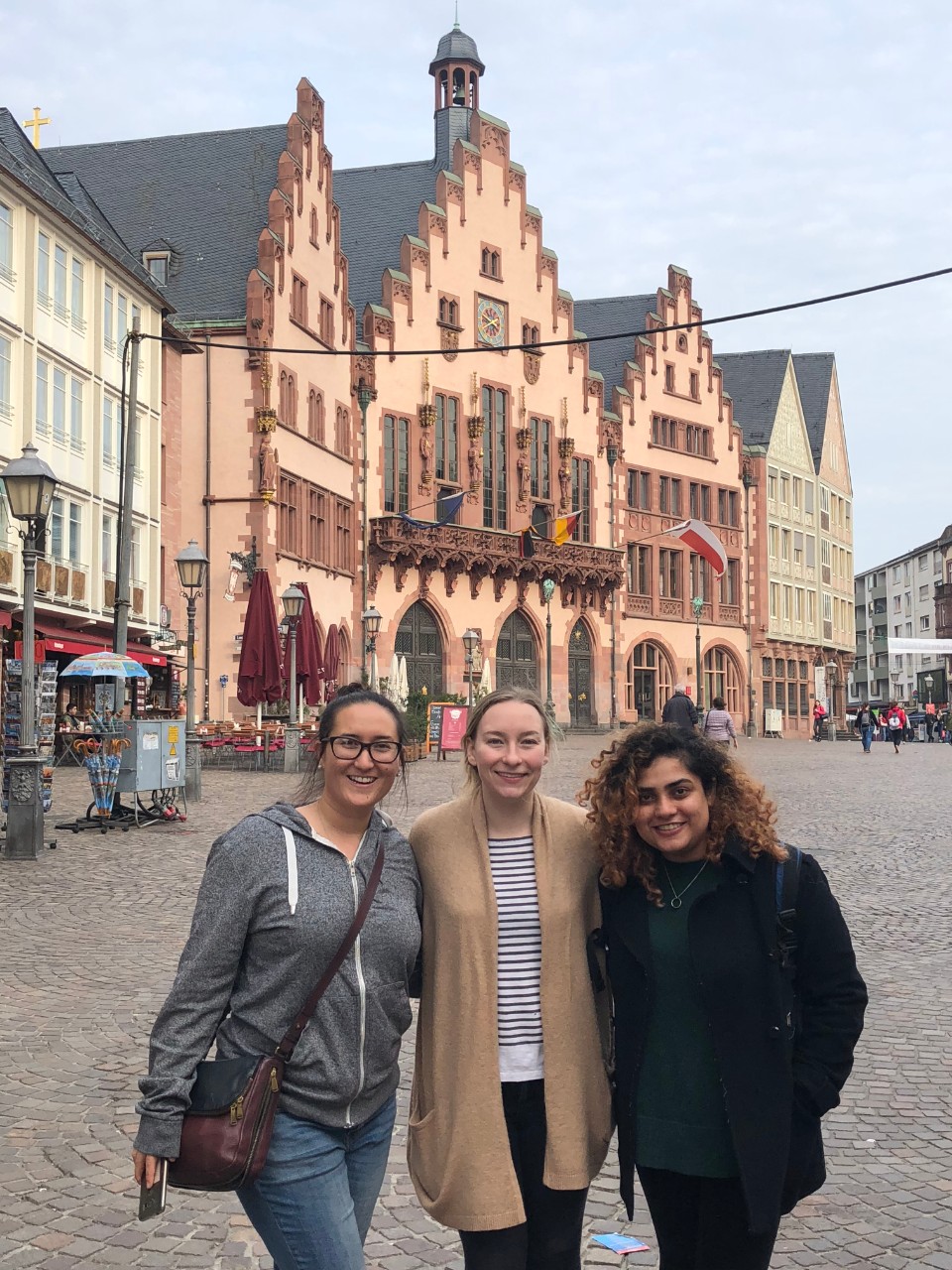