Professor Jennifer Trahan has been working on a proposal for a Special Tribunal on the Crime of Aggression to adjudicate cases against political and military leaders implicated in the invasion of Ukraine.

During September, Professor Trahan was able to present on this topic as part of a blog post series running on Just Security with Oona Hathaway of Yale Law School, former US War Crimes Ambassador David Scheffer, and Astrid Reisinger Coracini of the University of Vienna. The posts (starting with the first one) can be found at The Case for Creating an International Tribunal to Prosecute the Crime of Aggression Against Ukraine. Professor Trahan's publication (the third in the series).

Professor John V. Kane, PhD has a research article appearing in the latest issue of the journal, "Party Politics." Kane's co-authored research, "Partisans Use Emotions as Social Pressure: Feeling Anger and Gratitude at Exiters and Recruits in Political Groups", investigates how partisans might attempt to maintain and build political groups. The study features statistical analyses of large datasets from both the US and Denmark. The authors find that emotional expression--particularly the expression of anger and gratitude--is one way of keeping other members of the party from leaving, and also for encouraging members of the opposing party to join.

Adjunct Instructor Chloe Demrovsky was interviewed by Candice Georgiadis as a part of Authority Magazine's Female Disruptors series on the three things you need to shake up your industry. A lot of her work is about applying the concept of resilience, or the ability to bounce back, across various spheres of influence, whether personal, professional, organizational, or systemic. On the systemic level, Chloe works on disaster risk reduction and climate adaptation. She is currently working on a research project about how operational resilience can help companies disclose the impact that climate change is and will have on their finances and operations.

On 18 September Waheguru Pal Sidhu, PhD was interviewed by Doordarshan India’s Ramesh Ramachandran on the prospects of reforms in the upcoming 77th United Nations General Assembly meeting. While elaborating on the challenges of enlarging the UN Security Council, Professor Sidhu noted that India could still contribute significantly to making the world body fit for purpose in the 21st Century.

On 23 September 2022. Professor Sidhu participated in a panel discussion on ‘Women, Technology and SDGs’, and presented the key findings of the report prepared by CGA students for the United Nations Foundation, titled, Towards a Global Digital Governance Architecture. He noted that while the majority were multistakeholder initiatives, they were also mostly from the global North. Additionally, most of the initiatives were aspirational rather than operational or enforceable. He argued for the need to regularly track such initiatives to monitor their efficacy and progress. The event was organized by the Observer Research Foundation, the Reliance Foundation and the UN Office in India. 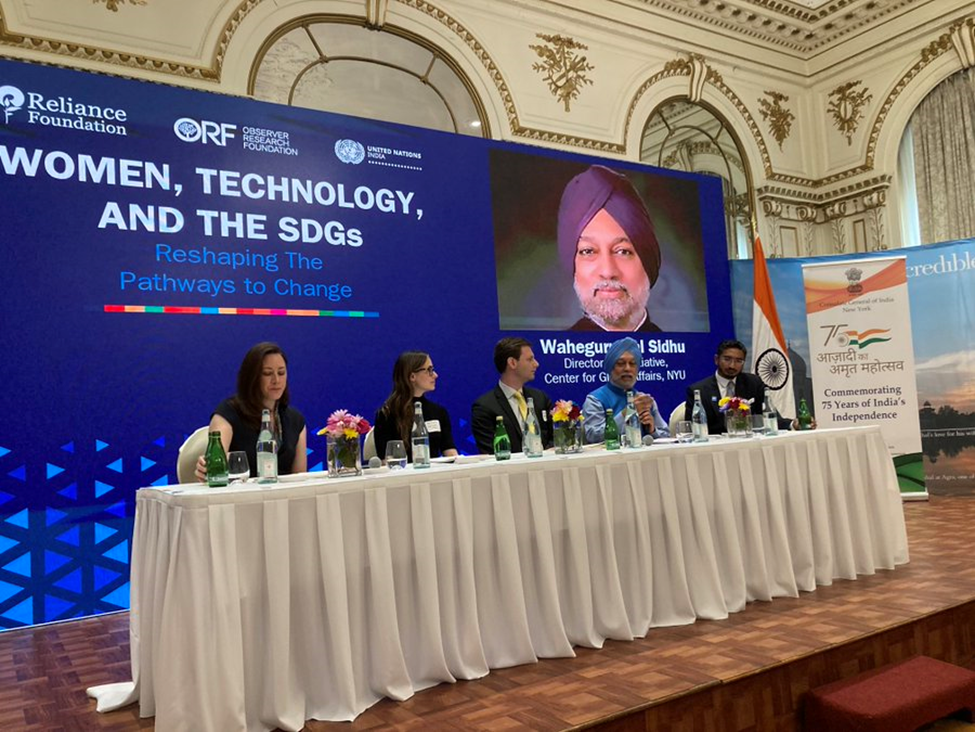