Just five days before the US 2020 elections, an astounding 80 million Americans have already voted by mail and in-person voting.  That would seem to be well over half of the expected record-breaking electorate.  By the morning of November 3rd, it is likely that approximately 60% of Americans will have already cast their votes for President, Congress, and state offices.

So that my CGA students will have a sense of the dynamic of the evening, I have prepared an Election Night Clock that tracks likely developments as states close their polls across the night, starting a 6 pm and carrying through until polls close in Alaska at 1 a.m.  The clock utilizes the most recent and reliable state polling detail, merged with the likely speed of reporting the vote based on whether states had processed and counted millions of absentee ballots before election day. The below chart suggests what to expect each hour of Election Night, noting the deep red and deep blue states that almost certainly can be called within minutes of poll closing.  It also suggests that three critical battleground states that process and count their ballots well in advance of election day, will be able to be declared within hours of each closing --  Ohio, Florida, and North Carolina closing their polls in the 7:30-8:00 time window.

It may be a long night.  But maybe not…

This chart uses the latest polling data in states with the time each state closes its polls on election night (Eastern Standard Time),  factoring in whether mail and/or in-person voting have been processed before Election Day so that state results will likely be  projected quickly. The chart provides a running count of which candidates will be leading in predictable electoral college states  where results are likely called at 6:00 pm, 7:00 pm, 8:00 pm, 9:00 pm, 10:00 pm, 11:00 pm and later for Alaska and Hawaii. The  chart suggests that we well may have an outcome before midnight on Election Night. 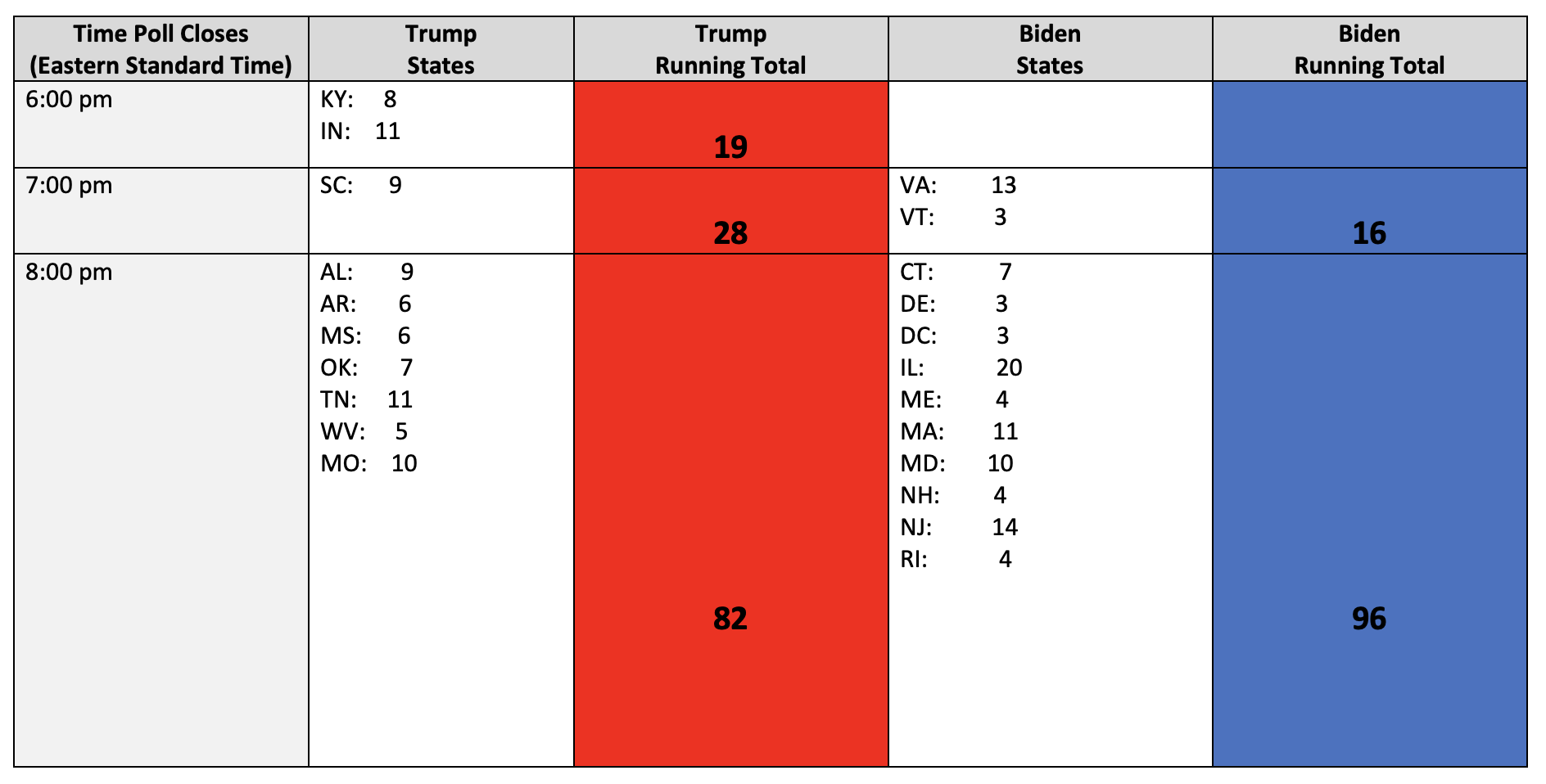 The following 79 electoral votes count their mail ballots and in-person early voting before Election Day and thus will likely be called  before 11:00 pm but at this time we cannot predict the likely outcome:

*HI Closes at midnight and AK closes at 1 am.

Several states do not permit mail ballots to be processed and counted before Election Day, thus significantly delaying reporting of  complete numbers. It is likely that we will not have final results from five states totaling 100 electoral votes before November 4th or  later. Those states are:

Unless Election Day vote shows significant, unbeatable leads for one candidate, the networks will not call any of the above five  states until at least some of the mail ballots are processed and counted.