We are proud to publish the work of Hiroto Yoshimori, an ELI student. His “Drunk Tokusuke Told Me,” is the first ELI student essay to appear in our series on student writing. Yoshimori was born into a honey-beekeeper family on Kyushu Island in Japan. A graduate of aesthetics art-theory at Keio University in Tokyo, he worked as a piano tuner and as creative manager for Amazon Japan. Interested in art, poetry, and novels, he is now studying at the ELI. He also is taking storytelling classes through a certificate program offered by NYU SPS. 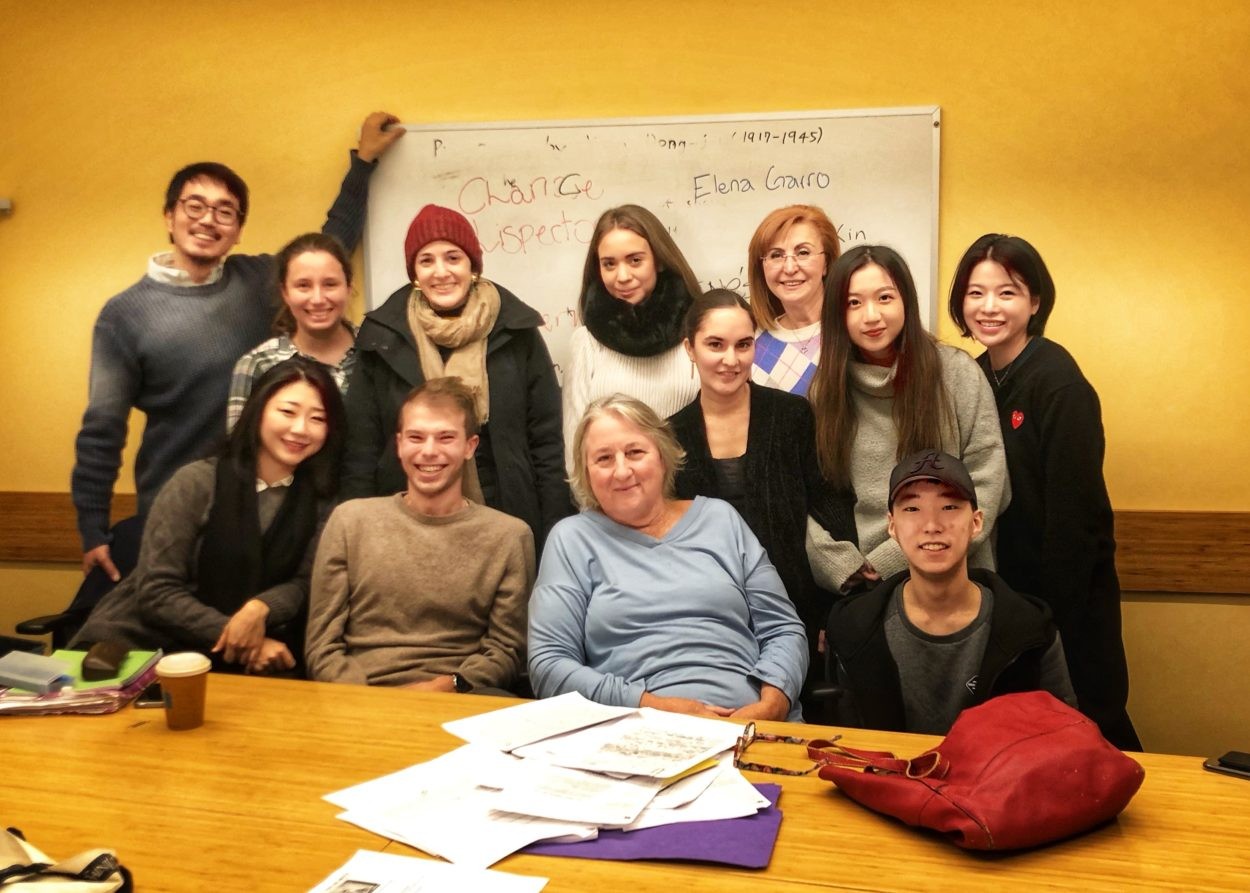 His heart had kept beating even after he stopped breathing. “Strange.” His first son looked at his brother. “Funny.” My uncle answered and smiled at my father. An hour later, at the same time his heart finally stopped beating, my grandfather’s ninety-three-year life ended. This story has been made with hundreds of fragments I’ve heard from this drunk old man, Tokusuke, every Saturday night for about ten years in my childhood.

I don’t remember my mother very much, drunk Tokusuke told me. His mother was his father’s second wife. Tokusuke was the fourth child. His mother, an intense person I heard, who rode a bicycle, was rare at that time. And sometimes after drinking she went wild and mad and ran amok. One day at someone’s funeral, she drank too much and made too much noise. Then his father decided to divorce her. Having lost his mother, he, this little boy, lived without knowing about his mother’s love. The third wife for his father came. But she was cold. It was a hundred years ago.

I was a class leader, drunk Tokusuke told me. I believe he was a clever, smart and rebellious boy. One day at elementary school his teacher made his classmate feel stupid. Tokusuke protested and the teacher struck him. From that time, he became almost deaf in his left ear. He dreamed of becoming a teacher. Before graduating from elementary school, he asked his father to go to study education. It was the only way for him to go to a higher-level school. “No way” His father said but he let him go to Iwataya, a Kimono shop, in Fukuoka city, now a big department store, to work as a “Decchi”. A decchi was a child’s job for the lowest and the youngest people in a company. He was sold off to the store. It was 90 years ago.

I hadn’t seen the sun for several years, drunk Tokusuke told me. He worked all day inside the store and couldn’t go out freely. After several years, he was recognized as a reliable person so he began going out to collect money from customers at night. “Only a reliable person could do that,” drunk Tokusuke emphasized. He went to a place called Karyukai, like a salon for the rich with Geishas. There he memorized all the classic Japanese songs that the Geisha was singing while he was waiting. He was hungry for knowledge and culture. One day he became ill, a 20-year-old without sun light for several years. Tuberculosis was the most feared disease at the time. Iwataya let him go back home. He was fired. It was 80 years ago.

“Brush the skin with a dry towel every day. Drink fish liver oil every day.”

None of my family wanted to have dinner with me, drunk Tokusuke told me. Tuberculosis was an infectious disease and there was no way to cure it at that time. It was a “Deathese.” Only his elder sister Yasa who worked in a remote part of Shanghai, kindly sent him money several times but Tokusuke didn’t know that because his father’s third wife stole all of it. He built a hovel on the beach and started living alone with only one book written by a doctor, “This Way, I Cure Your Tuberculosis.” The book told him two things : — Brush the skin with a dry towel every day. Drink fish liver oil every day. Fishermen gave him fish and he made liver oil from it. It tasted too bad to drink, he said, and he brushed his skin with a dry towel every day. Surprisingly, this worked. He got better little by little. One day he visited the author of the book. The doctor recommended that he spend time in a warmer area and told him about a farm on Tanegashima island. He decided to go to the far southern small island. This was 75 years ago.

Women came to my room every night, drunk Tokusuke told me. On that southern island people lived more primitively and freely. Their clothes were simpler than he knew. He helped out on a farm and maybe for the first time he could enjoy a free life under the evergreen trees. Japan was at war and all the people believed that the emperor was God. “I never believed that the person was God.” He told me. He also could escape the draft because of his illness. Then his illness disappeared. One day the doctor contacted him and asked him to help a doctor’s friend, Professor Shirota, who had started a business in Hiroshima. Tokusuke said “good-bye” to the women on that island. It was 70 years ago.

Professor Shirota and his wife were very kind to me, drunk Tokusuke told me. He lived with them and helped them with their business. He felt it was a very strange business. Professor Shirota was a researcher of lactic acid bacteria. Ideally, milk was the best for cultivating it, but it was wartime, so the professor used boiled juice that came out in the process of making silk thread. Tokusuke pulled a cart and walked around Hiroshima. “Here is human intestinal lactic acid bacteria! For your health!” But people were having a hard time just living. No one bought it. One day the professor decided to close the business. And they left. Tokusuke also went back home. It was a few weeks before that the atomic bomb destroyed Hiroshima. And it was a long time later I noticed the professor had become the founder of Yakult company.

“…his singing classic Japanese songs and his dancing like an octopus. “

The rest of my life is like a bonus, drunk Tokusuke told me. He married. He had two sons. He started a honey bee garden. He loved drawing. He wrote haikus — and he drank. And I, a little boy, loved my grandma. Every Saturday I took a bus to visit her. But he was also there. He would start drinking in the evening. It was hard to listen to his selfish, boastful and miscellaneous words without delicacy. One night he drank and sang. Another night he drank and danced. His words without delicacy, his singing classic Japanese songs and his dancing like an octopus, everything was hard to understand for me as child. When I became ten, I started learning to respond to him and fight with him. He was so angry and chased me all over the house. It was 36 years ago.

Hiroto! We’re going to burn grass, drunk Tokusuke told me. One fall day he told me to come with him to start to burn grass on the riverside near his house. The dead grass covered the riverside. The flames spread quickly, but he couldn’t stop the fire because he was drunk. Almost all the people in the village came to try to put out the fire with river water. The riverside and one tall cedar tree were burnt down. Another day a neighbor rushed in, grandma and I ran and found drunk Tokusuke had fallen off his bicycle and he was sleeping on the road. Among the many people who looked at us at a distance, we had to carry him home by cart. There were many many many such strange things I experienced through him. On Sunday morning I often woke up with anger that still remained from the last night’s fighting with him. But I could find only a quiet old man reading the newspaper. He noticed me, smiled at me and said to me, “Hiroto, you’re visiting us?” He did forget everything when he was drunk. A quiet,-hard-working old man was sitting there. So, I would answer him, “Yes, grandpa. Good morning.” It was a kind, heartful and absurd morning.

What a strange and funny time I had with him, I told you. Sometimes I think about his 20-year-life and his over-70-year bonus. It was too long to be called a bonus. He spent his bonus without getting sick once. He died. He just died naturally. His heart kept beating. It sounded like the last fragment he told me. Sometimes I think about his life, strange like the way he loved us and funny like his octopus dance. It was my grandfather’s 93-year-old life. 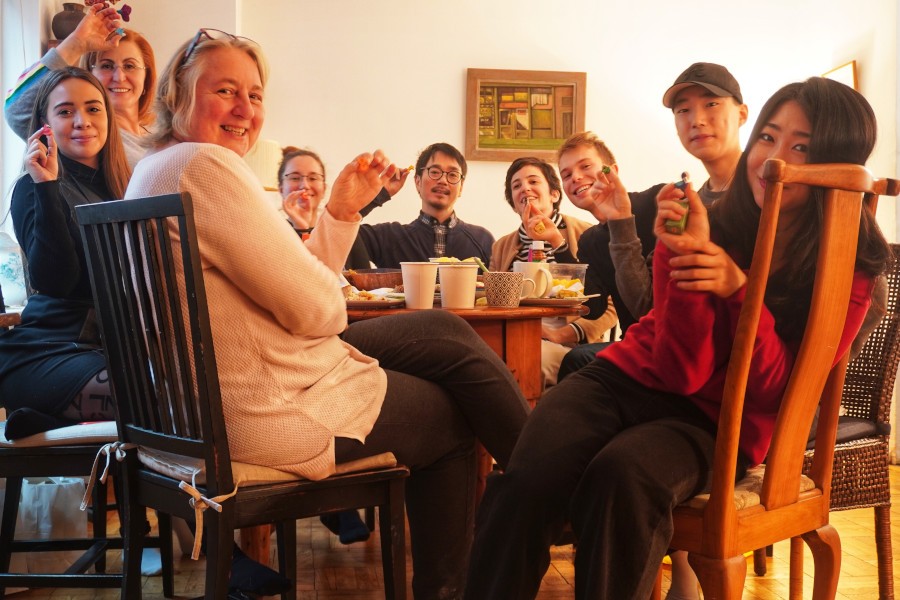 Yoshimori (in back, middle) with Professor Karant and students from the Fall 2019 semester. 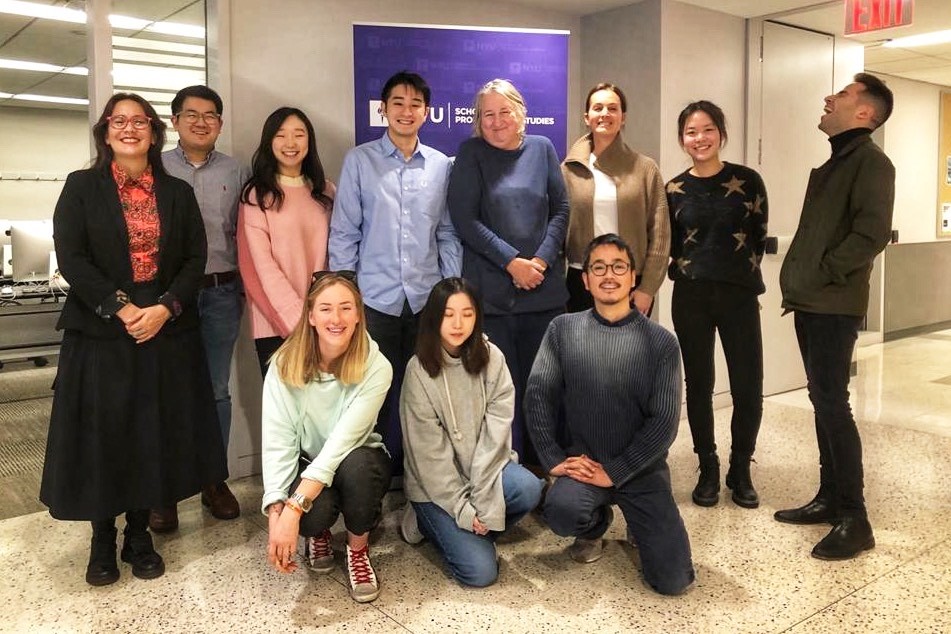 Yoshimori with his teacher and classmates, during the Spring 2020 semester.