“Greetings from the future,” said Edward Felsenthal, Editor-in-Chief of TIME, repeating a colleague’s comment as staffers gathered for their first video chat right before lockdown last spring. Felsenthal and members of his team recently hosted a group of NYU MS in Publishing: Digital and Print Media students for a virtual visit to the legendary brand, where the future is now the present.

Since early March 2020, TIME has moved to an almost completely remote operation. “It’s been incredibly challenging, as it has been for everyone, and stressful. But I think the TIME team has really rallied,” said Felsenthal, noting that not even a week after closing their offices, TIME produced a magazine despite the challenges of adapting to working from home and the uncertainties of life in a pandemic. With live events out of the question, TIME then launched their “TIME100 Talks” as a series of virtual conversations created to replace an in-person summit that was supposed to occur last April. The Talks have emerged as a huge success, so much so that TIME held 41 talks in the past year, and has plans for at least 32 more in 2021. 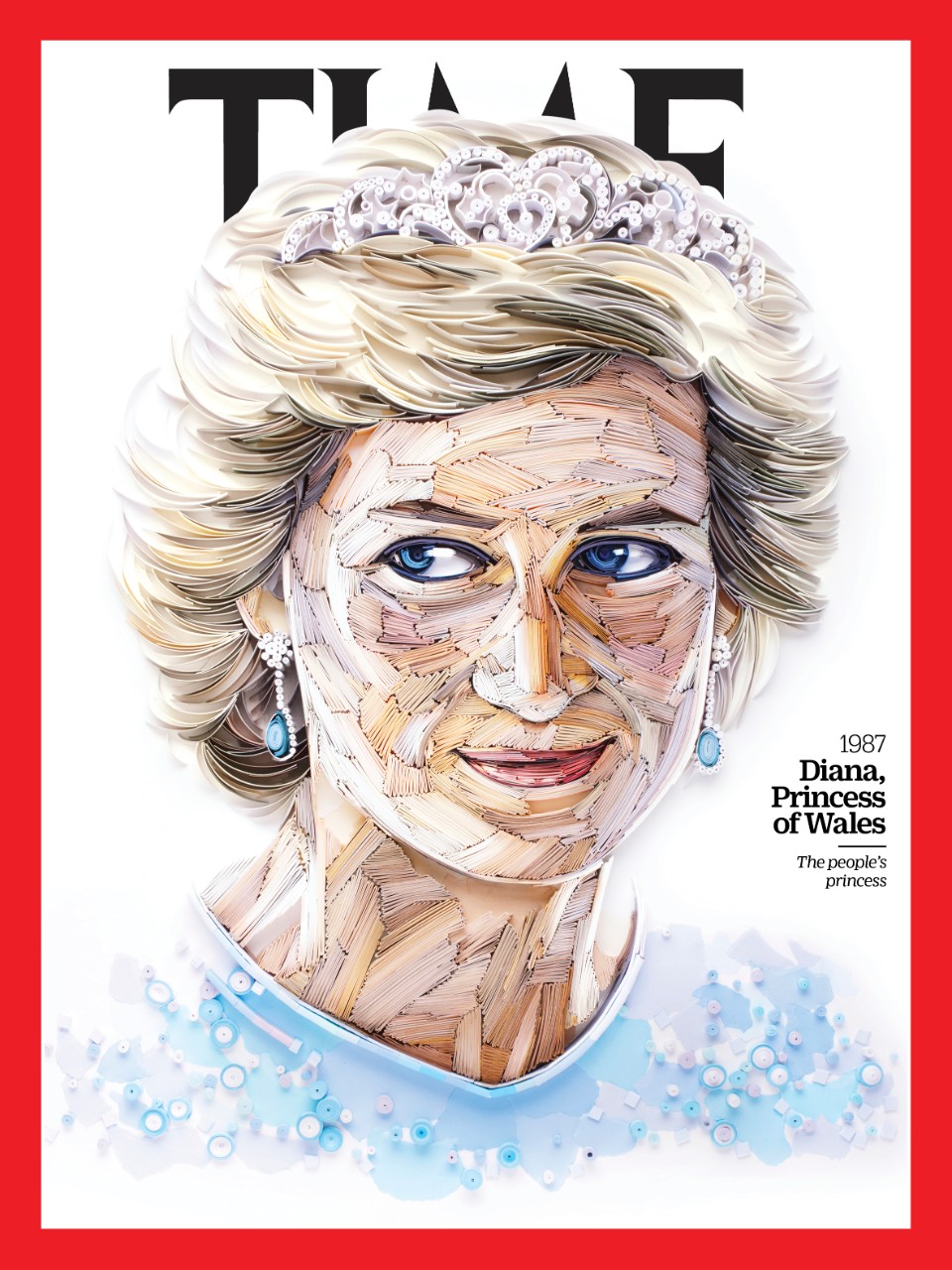 This cover, featuring a portrait of Diana, Princess of Wales, was created via quilling, also known as paper filigree.

With its 100th birthday coming up in two years, TIME has new ownership and continues to widen its reach with extensions like TIME for Kids and TIME Studios, their Emmy award-winning television and film division. “What we’re doing at TIME is building on the legacy of the brand and the magazine,” explained Felsenthal.

These changes were the main topic of the NYU SPS MS in Publishing: Digital and Print Media students’ virtual visit last week. D.W. Pine, the Creative Director at TIME, has innovation down to a science. “Like most of you, my kindergarten teacher taught me how to color inside of the lines. It’s interesting, as you grow older, we’re told that in order to be creative, we have to start thinking outside the box,” said Pine, launching into a presentation on TIME’s 4,843 covers, all designed within the magazine’s iconic red border. “Hopefully, I’ll be able to show you that my kindergarten teacher was right. If I can leave you with one thing, it’s that I think we can all be creative [even] if we limit our options and focus on coloring inside the lines.” 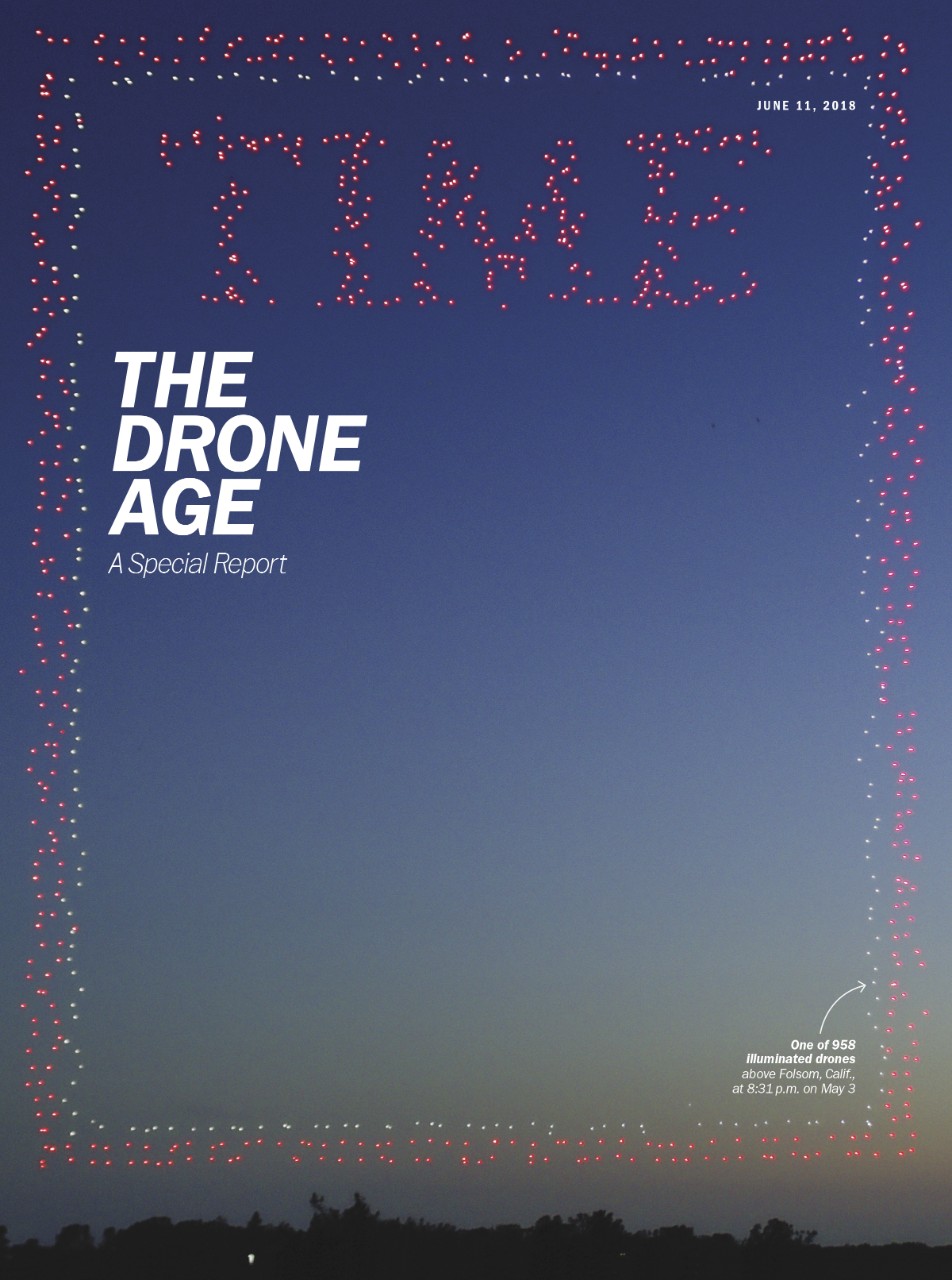 This cover, highlighting "The Drone Age," was created by arranging 958 drones in the shape of the TIME logo and border against an evening sky.

Oil paintings, portraits, graphic art, typography, and history-defining photos have all graced TIME’s covers, but Pine and his team don’t stop there. Covers have featured unique art styles like quilling, quilted fabric, a workable maze, and even a custom-made stained-glass window of former Presidential candidate Mitt Romney. They’ve commissioned everything from giant covers drawn in the sand spanning nearly 100 feet shot from above to arranging 958 drones to light up the night sky for that perfect cover photo. This creativity crosses over into their digital space, too. Since 2014, TIME has created animated versions of their covers 3 or 4 hours after publication to feature on social media and other digital platforms every single week.

Other major innovations include the massive expansion of their digital production. Justine Simons, the Supervising Producer for Video at TIME, scrolled down a list of “news makers, shakers, and entertainers” that they’ve featured in Talks over the past year. “Video traditionally is a medium about being there and documenting what is happening in front of your camera,” she noted. “Obviously, COVID, lockdowns, and all the security issues that we’ve had in the last year forced us to rethink and innovate. We felt a tremendous sense of responsibility to bring people into stories that were so important to tell.” 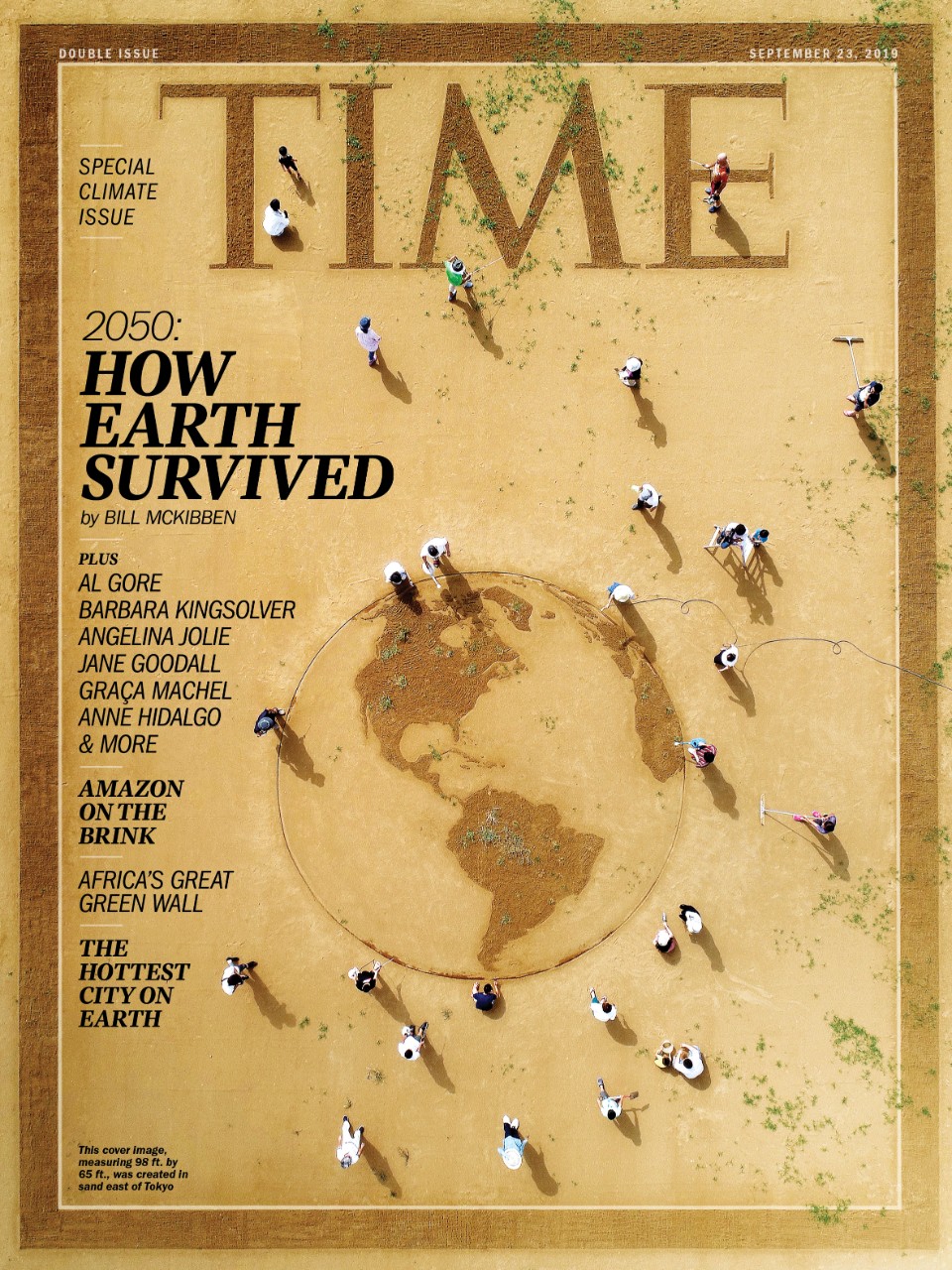 This cover of the special Climate issue was created via sand painting.

One such story followed Dr. Chen Fu, a physician at NYU Langone Medical Center. Shot entirely on his cellphone, it shows an up-close and personal view of his life in the middle of the COVID crisis in New York. It opens with haunting shots of a completely empty subway car and Grand Central Station as he makes his way to work. The piece is an emotional one, and beautifully told.

“It’s one of my favorite pieces of the year because it shows all the different ways you can continue to really have powerful narratives, even if you are not doing things the way you are used to,” said Simons. “It’s just so intimate and a really wonderful example of good editing and good producing and the willingness of a subject to share a story like that with us.”

Felsenthal, Pine, and Simons finished by advising us to remain open to change, to use it as a catalyst to grow and evolve. Embracing change, noted Simons, no matter what the genesis, is to our benefit: “It just makes the world that much wider for us.” For the visiting publishing students, hearing about all the changes TIME has embraced over the years, even over Zoom, was both comforting and inspiring.

Abigail is a second year MS in Publishing: Digital and Print media student and serves as Events Coordinator for the Publishing Student Association. She hopes to pursue a career in book publishing, specifically in editorial. Originally from Texas, Abigail loves cooking, reading, and sewing.